Petrol prices to go up 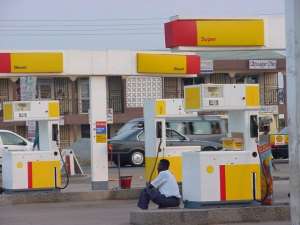 The price of petroleum products is expected to go up any moment if the economics of crude oil pricing is to be fully applied. Uncertainty in the Gulf over US threats of attacks on Iraq and cuts in oil production which have seen crude oil rising to US$30 per barrel, the steady depreciation of the cedi and huge debt of ¢3.4 trillion being serviced by the Tema Oil Refinery (TOR) are conspiring to make increase in petroleum products inevitable. According to “The Statesman”, as a result of these factors, the refinery has recorded losses totaling ¢244bn since April this year, with anticipated loss of ¢50 billion every month of the current trend continues without commensurate increases by the refinery. The increases, if they should come, will be the second by the 21-month-old NPP government. The first increase, the Energy Ministry says was as a result of the ¢2.3 trillion debts built up by TOR as a result of the failure of the NDC government to pass on crude oil price increases and increasing production costs triggered off by the depreciating cedi between 1999 and 2000. The ¢2.3 trillion debt, which itself, was enough to cripple the entire banking system in the country where the total primary capital of all commercial banks operating in the country was about ¢2trillion, eventually hit atrocious level of ¢3.4 trillion. This staggering sum, owed to different banks, attracted a whooping monthly interest of ¢55 billion and wiped off the windfall profit arising from tumbling crude oil prices after the terrorist attack in the US last year. According to TOR sources, the cumulative windfall from March 2001 to March 2002 was in the region ¢100billion. “This, put against the monthly interest bill of ¢55billion, by lowering crude oil prices to Ghanaians, as many demanded and indeed, in line with the government’s commitment to adjusting ex-refinery prices automatically in line with the world crude oil prices and exchange rate, said the sources. A 45% increase is expected.