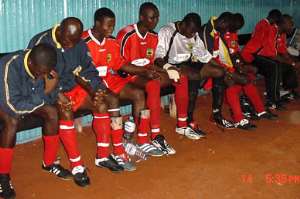 KUMASI Asante Kotoko’s march into history faces a critical test on Sunday when Congolese party poopers’ AS Police, attempt to put the brakes on the fallen African giants as they come close to their third continental glory. Kotoko’s drought in African competition dates back to 1983 when they won their second African Cup, but after years of under achievement the Porcupine Warriors are two games away from winning the Cup Winners Cup. On Sunday they need to overcome opposition from the Policemen from Congo-Brazaville who hope to end Kotoko’s impressive run of form in the competition. Having reached the penultimate round, both sides fancy their chances very much. The smart money is definitely on the Oseikrom lads whose clout in African club competitions always sends a tingle of fear down the spine of their opponents. Kotoko’s confidence this time has been boosted by the manner in which they dispatched their opponents, Santos and Ghazel El Mahala albeit the hard way. Having survival the Egyptian scare, Ralf Zumdick must have realised by now the essence of capitalising on their territorial advantage. This fact has been re-echoed by Kotoko’s skipper Godwin Ablordey who says his side would go on rampage and win by at least 3-0. A 3-0 victory would definitely give Kotoko a leverage in the return leg in Brazzaville, especially since they have scored at least two goals in all away encounters with AS Sonagol, Santos and El Mahala. Nevertheless, victory would not come easy. The Policemen have similarly performed well in the competition and are reportedly in top shape in their domestic competition, having just won the League de Brazzaville and are gearing up for a playoff to determine the national champion. Kotoko have peaked at the right moment. Their performance in each round has been a remarkable improvement and their fans are hopeful that Zimdick lives up to the standard set by his predecessors Ernst Middendorp and Ian Porterfield. Luck is set to smile on Kotoko as they have rediscovered their scoring form, with wider scoring options provided by Michael Osei, Nana Arhin-Duah and Ablordey. Their recent form points to another goal feast on Sunday. With all domestic competitions suspended to accommodate the Kotoko-AS Police game, which has assumed a national dimension, so too has the expectation of Ghanaians soared that Zumdick and his charges can not afford to let the nation down. However resilient the unheralded policemen prove to be, they must be brought to their knees at all cost. No one appreciates the crucial nature of this semi-final tie better than the Kotoko players. It is a chance of a lifetime that would not only open a new page in the history books, but also serve as climx of their much-trumpeted rebuilding and pave the way for a bountiful harvest in the coming years. Ghanaweb African Club pages