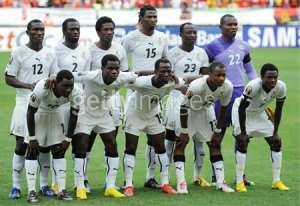 Ghana will face Sudan in their 2012 African Nations Cup qualifying campaign after the two were drawn together in Group 9.

The pair were placed alongside Congo and Swaziland at a draw ceremony in the DR Congo city of Lubumbashi.

Forty-four teams were entered into the draw by the Confederation of African Football (CAF).

The Black Stars, who finished second at the recent Cup of Nations were seeded in Group 9 as they seek another run at the competition to be co-hosted by Gabon and Equatorial Guinea.

Though Ghana are placed in a tricky group, the draw also delivered a the so-called 'group of death'.

Holders Egypt were handed a tough group as they take on former champions South Africa, Niger and Sierra Leone in their group.

Cameroon will play Senegal, DR Congo and Mauritius in Group 5.

Togo were not in Saturday's draw but could still be included at a later date if their appeal over a ban from the next two Nations Cups with the Court of Arbitration for Sport (Cas) is successful.

Togo were banned from the 2012 and 2014 Nations Cups by the Confederation of African Football (CAF) because of government interference after withdrawing from the 2010 tournament.