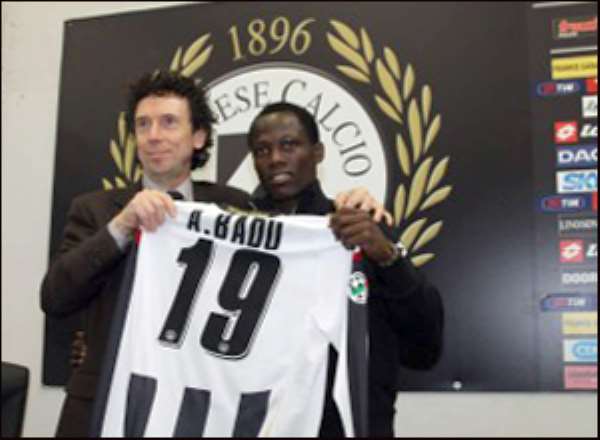 Black Stars midfielder Emmanuel Agyemang Badu has become the first Ghanaian local player to walk into the first team of a club in the major leagues of Europe.

Badu has been named in Udinese's squad to face AC Milan in the Italian top-flight this weekend just TWO DAYS after joining the club.

Ghana local players normally go through the youth system of a team or are made to adapt to the European style by playing with the second team before they are promoted.

But Badu overly impressed officials of Udinese in his first day of training on Wednesday that they have named him in their 20-man squad for the game.

The fact that he has been considered for the clash against giants AC Milan on Friday means he is highly rated.

This is an indication that Badu has cemented his reputation as an influential player and one to be taken seriously for the future.

Badu secured the work permit to play in the Italian top-flight on Monday and Udinese's decision has placed him in the Ghanaian history books.

The 19-year-old arrived in Italy on Wednesday morning to begin his career with Udinese following an excellent showing at the Africa Cup of Nations in Angola last month.

Badu will join his Ghanaian colleague Kwadwo Asamoah in the Udinese camp for the AC Milan game.