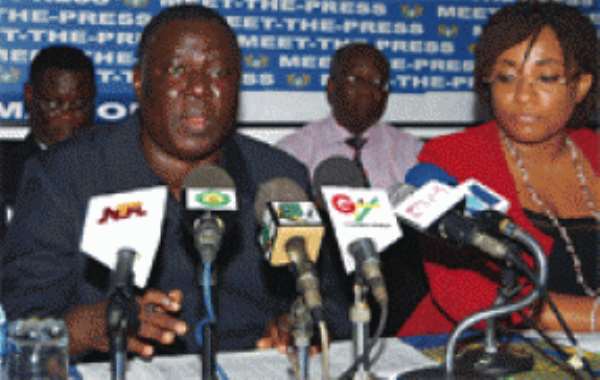 The Government’s decision to increase bridge and road tolls should not be seen as insensitivity to the plight of Ghanaians, but a bold attempt to save a bad situation.

Taking his turn at the weekly meet-the-press series in Accra, the Minister of Roads and Highways, Mr Joe Gidisu, said the time had come for the government to increase the tolls to raise enough revenue for road maintenance, which is important to national development.

“The proportion from this source of revenue will, therefore, increase from 1.8 per cent to 12 per cent of total receipts into the Road Fund,” Mr Gidisu said.

He said the implementation of the law (Act 793 of 2009), which took effect from February 1, 2010, had begun yielding some positive results pointing out that the total daily revenue collected from all the 29 toll points throughout the country had increased from GH¢8,114 to GH¢97,299 since the increase.

The minister, therefore, called for public support, adding that the maintenance of the roads by way of routine and periodic maintenance was important, if not critical, in the protection of the huge investments made in the road sector.

He said currently, the Road Fund was indebted to road contractors who undertook maintenance works to the tune of about GH¢120 million, adding that “this amount is different from the GH¢160 million arrears which the government recently realised for projects to be funded by the Consolidated Fund”.

The Roads and Highways Minister revealed that because the government was unable to raise enough revenue to clear the heavy indebtedness to the road contractors, contractors were reluctant to undertake maintenance works, making it difficult for the sector to undertake such works on timely basis.

Mr Gidisu said the Road Fund Board had over the years been unable to secure regular increments in levies, tolls and fees to correspond with the rising cost of road maintenance, adding that all additional revenues to be accrued from the increase would be properly used for the maintenance of the road network, which is about 67,000 kilometres.

He explained that while levy on petroleum products accounted for about 94 per cent of the revenue for road maintenance, the road and bridge tolls contributed only 1.8 per cent.

He said the routine and periodic maintenance of roads and their rehabilitation were funded from the resources of the Road Fund, a fund dedicated to these activities, adding that the Road Fund had on the average been providing a total of about GH¢110 million towards these activities.

He stressed that the total receipts from these sources were not adequate to meet the total maintenance needs of the road sector, hence the increase to raise more revenue.

“The fund can only cover about 55 per cent of the total maintenance needs in a given year, leaving a backlog of about 45 per cent,” the minister said.

He said the government was aware that since January 1999, the road and bridge tolls and the fuel levy had not been increased, resulting in the current poor state of roads.

“We must, therefore, appreciate the increase in the light of the immense benefits that will accrue to all Ghanaians. We will therefore like to request our fellow compatriots to bear with us, since there is the assurance that the increased resources of the fund will be put to good use,” he stressed.

He hinted that there were plans to consider drivers who used such roads more often to see how best to reduce how much they should pay.