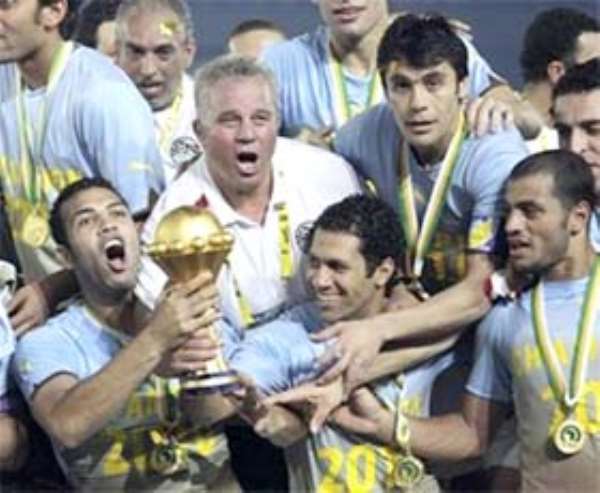 Egypt made up for their failure to qualify for the 2010 World Cup in South Africa when they beat the Black Stars of Ghana by a lone goal to lift the 2010 Africa Nations Cup.

Even though Ghana outclassed them in yesterday's final match played in Luanda, the North Africans still managed a 1-0 win to lift the trophy for a third consecutive time, and a record seven in total.

The 'young' Black Stars were so impressive that anybody who did not know the two teams would think they were the favourites.

The West Africans showed every indication of fighting for the trophy on the blast of the referee's whistle, forcing the Egyptians to commit errors in their own half.

Skipper Mohammed Hassan's wayward effort in the 13th minute spoke volumes about the frustrations of the Egyptians as they tried to capture the midfield.

The impregnable Ghanaian defence easily contained the Egyptian strikers; but Mohammed Zidan showed glimpses of brilliance in the 26th minute when he beat two defenders with cheeky ease and unleashed a left footer that went wide.

In the second half, both sides started slowly, sizing up each other and trying to gain control of the midfield. Anthony Annan and Agyeman Badu proved a mouthful for the Egyptian midfielders.

The two teams resorted to an open game after one hour of a cagey encounter. The Pharaohs were using long passes while the Black Stars relied on counter-attacks, as a result of which Asamoah Gyan's curling shot missed the top corner by inches.

The Ghanaian striker was in the thick of affairs again in the 79th minute when he delivered a rocket of a free-kick which was fisted away by Goalkeeper El Haddary, who was adjudge the best keeper of the tournament.

Ghana had a chance to grab the opener in the 80th minute, but Andre Ayew could not reach Samuel Inkoom's incisive cross in time to connect the ball home.

Super-sub Gedo scored a superb goal in the 85th minute to take his tally to 5 goals and win the golden boot award. After receiving a wall-pass from Zidan, Gedo shot the ball into the net for the only goal of the match.

The Black Stars replied immediately, multiplying in attack and pinning the Pharaoh's to the wall.  The West Africans had perhaps their best chance of the game in injury time when Inkoom's cross found substitute Eric Addo in the 16-yard box of the Egyptians, but he fluffed it, leaving the scores 1-0 in favour of Egypt.