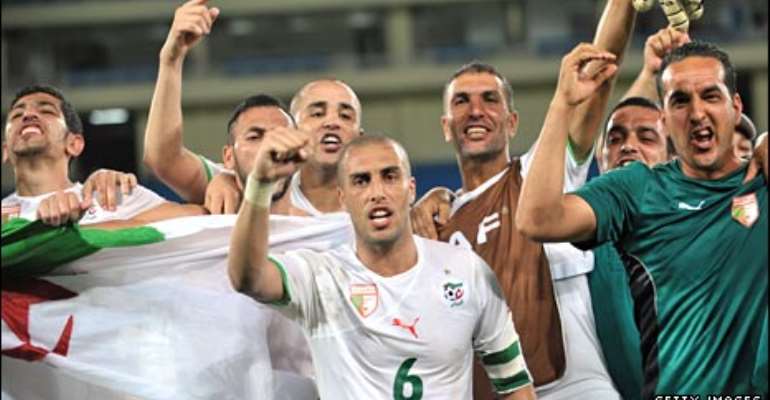 Goals from Salomon Kalou and Karim Matmour made it 1-1 until an 89th minute screamer from Kader Keita looked to have put the Elephants through.

But substitute Madjid Bougherra rescued Algeria with a last-gasp header to force the contest into extra time.

Hameur Bouazza then took advantage of disastrous defending to send Algeria into the semi-finals.

The Elephants thought they had found an equaliser in extra-time injury time but Kolo Toure was wrongly ruled offside.

For a team which had eight days to prepare, Ivory Coast looked like a spent force as the game went beyond 90 minutes.

And Algeria, not given much chance prior to the game, have sent a message to the World Cup - and Fabio Capello's England - that they are not to be underestimated.

For all of Ivory Coast's attacking prowess, it was ultimately woeful defending which proved to be their downfall.

After Keita appeared to have the game won, Elephants goalkeeper Boubacar Barry looked dumbfounded as his defence stood motionless when Rangers star Bougherra rose to nod home and make it 2-2.

The winning goal was much the same, this time Karim Ziani's cross arriving for Bouazza, who plays for Championship side Blackpool.

He rose above some criminally static defenders to make it 3-2 after just two minutes of extra time. Kader Ghezzal missed a simple chance to add further insult to injury in the 106th minute.

It was an outcome few would have predicted as Ivory Coast took an early lead through Kalou. The Chelsea man managed to stay onside as a deflected pass landed at his feet and he slid it past Fawzi Chaouchi after just four minutes.

Ivory Coast then dominated proceedings, but, aside from a decent effort from Kalou which hit the side netting, they had nothing to show for their efforts.

In the 15th minute, Didier Drogba caught up with a through ball from Gervinho, ran into the area and was abruptly taken down by Rafik Halliche. A clear penalty - but the referee waved play on.

Somewhat uncharacteristically, Drogba offered only muted appeals for the decision - while Algeria's Bougherra wanted the Chelsea man booked for diving.

Slowly, Algeria pulled themselves back into the game. It became a battle of two distinct styles - Algeria's posession football versus the thrilling counter-attack of the Ivorians.

In the 40th minute, it was Algeria's approach which paid off.