Alex Nyarko Ruled Out For 6 Weeks 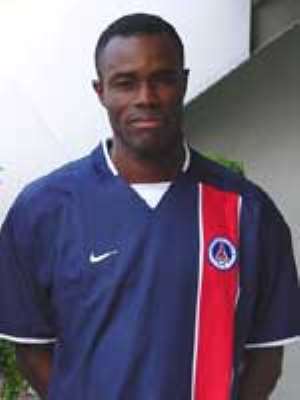 The Ghanaian international was stretched off the field in the 80th minute as his club won the game 3-0. Nyarko underwent operation Sunday morning in Paris to find out he extent of damage to the fractured left wrist. Officials of the club announced that the Ghanaian midfielder would be out for six weeks.

French man, Didier Domi, would take Nyarko's place. His is the third Ghanaian injure in a month. German based Black Stars player, Otto Addo last week sustained a knee injury after tearing some cruciate ligaments during Ghana's African Nations Cup qualifier against the Cranes of Uganda.

The third, Swedish based striker, Issa Mohammed damaged his knee cup. IFK Norrkoping signed the 21year striker from Ghanaian premiership side, Sekondi Hasaacas, on a loan deal. IFK Norrkoping club doctors operated Issa in a four-hour operation last week Thursday. According to Norrkoping doctors, the youngster's knee was worse than expected; 3-4 mm of the knee cup was worn down in the bottom. He has accordingly been ruled out for the rest of the season.

Give Me Chance To Correct My Errors — Disqualified Kofi Kora...
15 minutes ago

Gov’t Will Establish Committee On Compulsory Acquisition Of ...
35 minutes ago