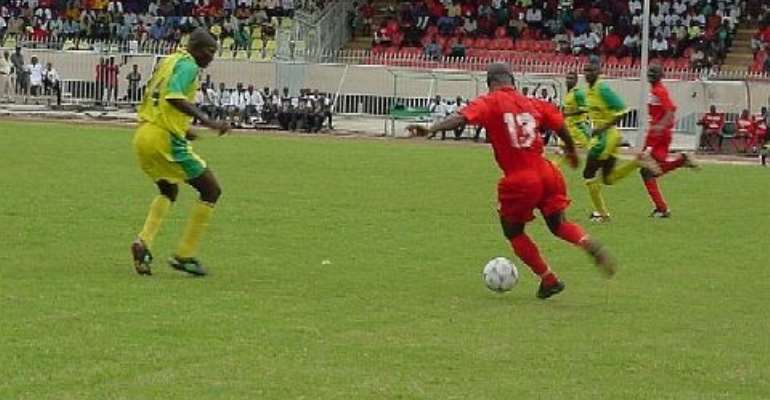 THE Kumasi Sports Stadium is to undergo some structural changes to accommodate plans by the country's sports authorities to turn it into a modern athletics complex to host international competitions.

Both the Accra and Kumasi Sports Stadia are earmarked for the rehabilitation of the athletics tracks and other related facilities.

On Tuesday two experts and their Ghanaian agents of German-based Polytan Company, which deals in artificial with turfs and synthetic running fields, inspected the technically dead tartan tracks of the Accra Stadium. The experts, Messrs Garry Walker and Klaus Stohr briefed the Deputy Minister of Youth and Sports, Mr Joe Aggrey and officials of the National Sports Council about their findings and recommendations.

At the end of the meeting, the acting Chief Executive of the Sports Council, Dr E. Owusu-Ansah explained that, the ministry is committed to putting in place modern tartan tracks in the country, but structural difficulties would make it virtually impossible for the Accra Stadium to be upgraded to international standards. Kumasi, on the other hand, could easily accommodate such structural changes required by the sport's world governing body, IAAF.

Under the new International Athletics Association Federation (IAAF), the jump events — long jump, triple jump, high jump and pole vault — must take place at a prime location of stadia and outside the tracks too. This means that the present site for the jump events at the Accra Stadium which is located just behind the goal post near the May 9 Stand, must be relocated to a place in front of the VIP Stand to meet international standards.

Such a change, according to Dr Owusu-Ansah, would therefore be very expensive and would necessitate the demolition of the VIP Stands and the stretch of stands along the wings of the Presidential Box. The architecture of the Kumasi Stadium makes it feasible for such structural changes to be effected without damaging the existing stands, and also at a lesser cost.

Under the present circumstances, only the tartan tracks will be changed in Accra stadium, which would be dedicated for schools and colleges activities and training while Kumasi will be used for national and international competitions.

In addition, the Kumasi stadium will have an electronic timing device fitted to meet international standards. Hence only records set in Kumasi would be ratified by the IAAF.

It is unlikely that the capital intensive project would take place this year as, according to the NSC boss, no budgetary provision, have been made for it. Funding for it would be provided by the government, but Dr Owusu-Ansah revealed that the German firm would also assist in sourcing for funding for the project.

Polytan Company is currently undertaking a similar project in the Nigerian state of Warri.

What Will The Publication Of 260-Page Cocoa Road Audit Repor...
10 minutes ago