Chelsea's Michael Essien out for six weeks with injury 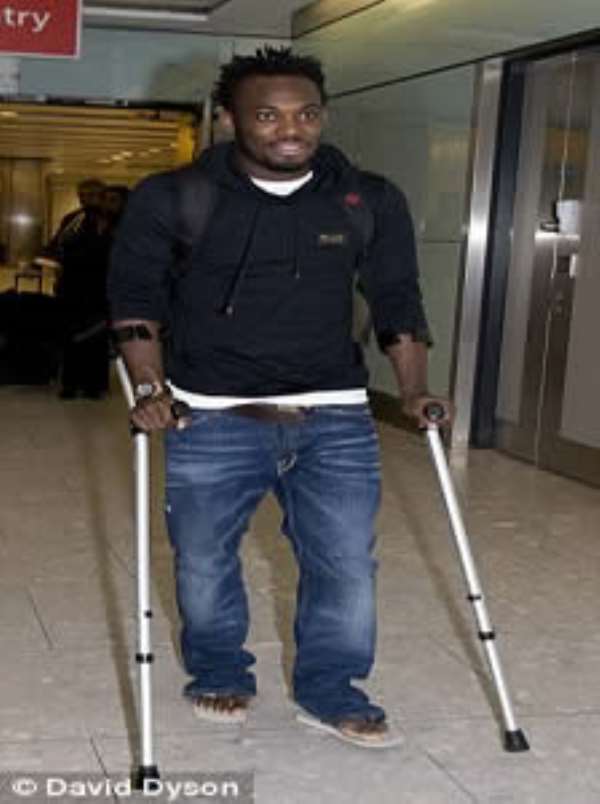 
Chelsea will be without midfielder Michael Essien for up to six weeks with the knee injury he suffered at the Africa Cup of Nations.

The 27-year-old was forced out of the tournament after hurting his left knee in training with Ghana on Sunday.

Essien arrived back at Chelsea's Cobham training ground on Thursday where he was further assessed by the club.

"He had a tear in the meniscus, and he is out for four to six weeks - I hope four," said Blues boss Carlo Ancelotti.

"It is not good news but I think that we will do a good job again."

Initial scans undertaken in Luanda, Angola, indicated that he would be out for at least a month.

They were understood to show that he has suffered a partially torn medial collateral ligament in his left knee and damage to his meniscus.

Essien will miss Chelsea's Premier League clash against title rivals Arsenal at Stamford Bridge on 7 February and the opening leg of their Champions League tie against Jose Mourinho's Inter Milan on 24 February.

The midfielder had only just returned to training on 6 January, having not played since tearing his hamstring while on Champions League duty with his club in early December.

The midfielder watched Ghana beat 10-man Burkina Faso 1-0 on Tuesday to advance to the Africa Cup of Nations quarter-finals before returning to London.

Meanwhile, Ancelotti insists that Joe Cole will remain a Chelsea player next season, even though he cannot guarantee him regular first-team football.

Cole's contract expires in the summer and the England midfielder, 28, is yet to agree a new deal with the main stumbling block understood to be his desire to play more.

Ancelotti said: "I cannot guarantee to Joe Cole that he'll play for Chelsea in every game.

Chiefs and Queen mothers of Nadowli-Kaleo congratulate Alban...
35 minutes ago