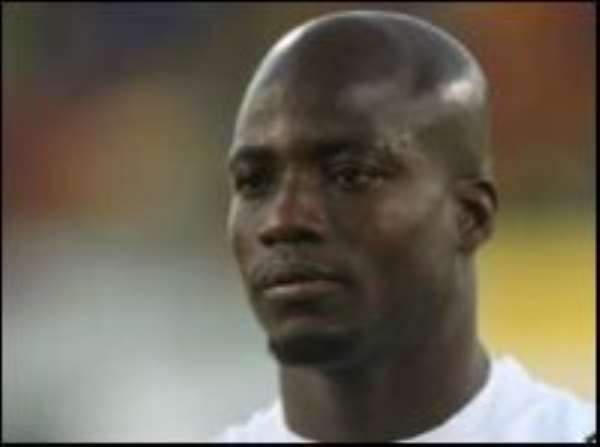 Ghana captain Stephen Appiah has heaped praise on the country's young team at the Africa Cup of Nations for reaching the quarter finals of the tournament. The Italy-based player, who is currently recuperating from an injury has also urged the players not to relent to bring Ghana its fifth Nations Cup title.

Appiah is delighted that the players fought to oust Burkina Faso from the tournament on Tuesday which paved the way from them to advance.

The inspirational regular skipper of the team is impressed with how they picked themselves up from the 3-1 Ivorian defeat insisting determination will take them far.

"I will like to congratulate the Black Stars for making the quarter finals despite the immense pressure they were under," Appiah said on his personal website www.stepapp.com.

"They showed character and determination in beating Burkina Faso and I am really pleased with their reaction after losing to Ivory Coast.

"It takes a lot of mental strength and they did very well."

Ghana will take on Angola in the last eight on Sunday and Appiah says the Black Star must not relent in the game against the host nation.

"From here on it is going to be difficult because every game is a final," Appiah said.

"One strike and you are out so they need to keep believing in themselves and fight to the end in every game.

"I have faith in the team and I am looking forward to watching them on Sunday."

Appiah has spoken to midfielder Michael Essien in the wake of his injury and wants a speedy recovery for the influential Chelsea player.

"I will also like to wish Michael Essien well and a speedy recovery after his knee injury," Appiah said.

"I have spoken to him and told him to be strong." he concluded.

Ghana, four-time African Champions needed a win to progress to the final eight of the competition after getting their campaign off to a stuttering start, losing 3-1 to Ivory Coast in Group B.

Despite a rather slow start, Ghana appeared to have finally warmed themselves into the competition as they matched the physical game of the Burkina Faso side who finished with ten men following a red card to Hamadou Tall in the second half.

In the absence of the injured Michael Essien who watched proceedings from the stands, Milovan Rajevac made four changes from the side that started against Ivory Coast last Friday, with Asamoah Gyan, Hans Adu Sarpei, Haminu Draman and Lee Addy all coming in.

Ghana will play against hosts, Angola in Luanda on Sunday.