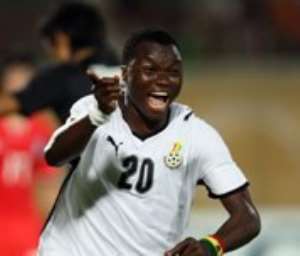 Ghana striker Dominic Adiyiah has revealed his desire to score at the ongoing Africa Cup of Nations appearance making his debut last Tuesday.

The AC Milan attacker came on second half substitute in Ghana's 1-0 win over Burkina Faso which pushed them to the last eight of the competition.

The 20-year-old is one of eight Under-20 players in the team who is filled with confidence of rising up to task ahead.

"When I was about to enter the field, I kept telling myself I wanted to score a goal and I really had my eyes on that. I want to score in this tournamnet," Adiyiah revealed. "You know that first games are difficult but I was determined to impress.

"I can say that we(Ghana) are growing in confidence and the next match I hope to have the same mentality and if I'm chosen, I do my best."

He has impressed in training and waiting to handed a starting role by Ghana coach Milovan Rajevac.