Ghana and Chelsea's Essien ruled out of Nations Cup 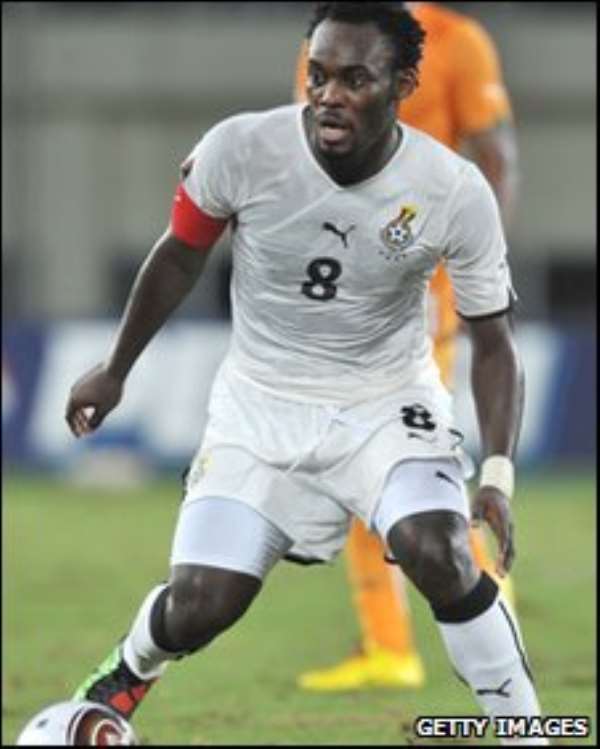 Ghana midfielder Michael Essien is out of the 2010 Africa Cup of Nations after suffering a knee injury in training.

The Chelsea star could also miss Premier League and Champions League matches after he suffered a partially torn medial ligament in his left knee.

Scans revealed he also suffered damage to his meniscus when sustaining the injury on Sunday morning.

Ghana's team doctor believes the injury will keep the 27-year-old out for at least a month and perhaps longer.

The news will come as a blow to both Chelsea's Premier League title aspirations as well as Ghanaian hopes of reaching the quarter-finals.

The Black Stars had been desperate to field Essien for Tuesday's must-win Group B tie against Burkina Faso in Luanda but he can only walk with the aid of crutches.

"This is a big blow because Michael is so important to our team," striker Matthew Amoah told BBC Sport.

"We've lost the motor in our midfield, and this is very bad."

The Chelsea man only returned to training on 6 January, having not played since tearing his hamstring while on Champions League duty with his English club in early December.

The hamstring problem meant Essien failed to start Friday's 3-1 defeat by the Ivory Coast, coming on a second half substitute for the clash in Cabinda.

He was stretchered off in that game before returning to the action, but his injury woes returned in full on Sunday morning.

"Michael was turning to make a pass when he just went down," midfielder Anthony Annan told BBC Sport.

"There was no contact from any other player but those around him say they heard a click, and then the physios rushed over."

Essien was ferried to hospital in an ambulance as he went for an MRI scan in Luanda on Sunday.

He becomes the latest of Ghana's key men to suffer injury, with John Pantsil, John Mensah, Laryea Kingston and Stephen Appiah all ruled out before the tournament.

If Ghana fail to beat the Burkinabe on Tuesday, the World Cup finalists will exit the Nations Cup.

Ivory Coast have already qualified from Group B, with four points from two games, while Burkina Faso have one point and Ghana none.

After Togo's withdrawal from the competition following the gun attack on their bus, Group B was reduced to three teams and just three matches.