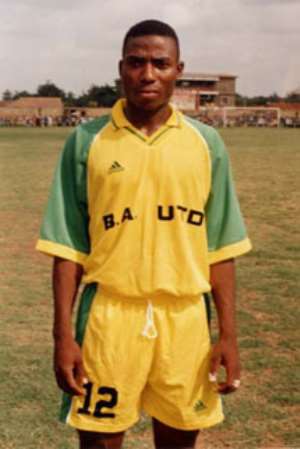 An 80th minute goal by Nkrumah was enough for B.A. United to beat visiting Obuasi Goldfields 2-1 in a friendly football match played at the Sunyani Coronation Park on Sunday.

Half time score was 1-0 for United.

The homesters' winning goal was scored through a goalmouth scramble during which substitute goalkeeper Atta Edmund looked on helplessly as Nkrumah's shot zoomed into the net.

Notwithstanding the friendly nature of the match, both sides featured most of their regular players, but surprisingly sold a dull match and the few spectators had little to cheer.

Centre forward Nasiru Gani opened the scoring for United in the 44th minute, but Goldfields redoubled their efforts on resumption and equalised in the 50th minute through Togolese import Noutsoudje Kwassi.

Both teams exhausted their substitutions including goalkeeper Atta Edmund of Goldfields who came in for injured Kankani in the 75th minute.