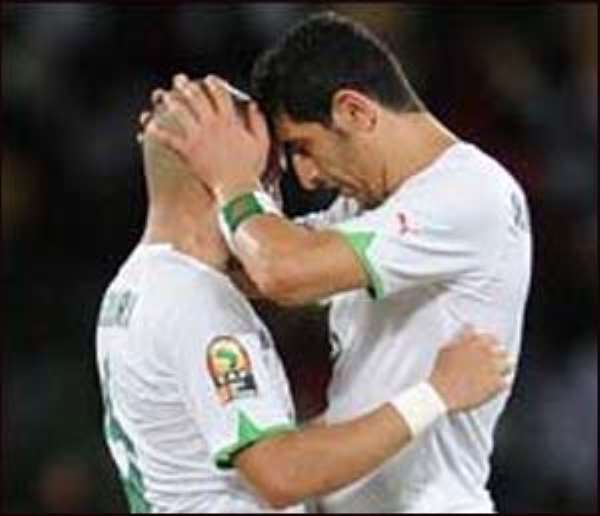 Algeria put their disappointing 3-0 loss to Malawi behind them to beat Mali in their second Group A game in Luanda.

Rafik Halliche headed home a Karim Ziani free-kick in the first half to seal the win for the Algerians.

Despite periods of pressure from Mali they were unable to create many clear-cut chances.

Mali's Mahamoudou Diarra and Bakary Soumare will miss the final group game against Malawi through suspension after picking up their second yellow cards.

The result means that Mali must now beat Malawi on Monday if they are to make it to the quarter-finals.

Mali coach Stephen Keshi dropped striker Frederic Kanoute to the bench for the game, and he was only brought on midway through the second-half, but failed to make an impact.

Algeria created the first opportunity of the game when Karim Ziani shot from a tight angle outside the area, which bounced off the bar.

Tenema N'Diaye should have done better on nine minutes after he got himself into a good position in front of goal but was tackled before he could shoot.

Mustapha Yattabare then saw his shot go wide after some poor Algerian defending.

The game then became a midfield battle with very few chances.

Ziani continued his good showing with another shot from outside the area that was well saved by Soumbeyla Diakhite, who was brought into the starting line up to replace Mahamoudou Sidibe.

The Eagles did get back into the game and some good work down the flanks failed to bring any clear chances.

Yasine Bezzaz then touched the ball past the Mali defence but was brought down by Soumare and from Ziani's free kick Halliche rose highest to score his first goal for Algeria.

Mali started the second half well with plenty of possession and Adama Tamboura's shot from a narrow angle forced Fawzi Chaouchi into a smart save at his near post.

After that Mali struggled to break down a strong Algerian defence, who were happy to sit back and soak up the pressure.

The Eagles continued their hunt for another late equaliser right until the final whistle but were unable to make the most of two corners in injury time.

Algeria coach Rabah Saadane was delighted with the win after their 3-0 loss to Malawi.

"This win has given the perfect answer to all our critics," he said.

At the time of going to press tournament hosts Angola had locked horns with Malawi.