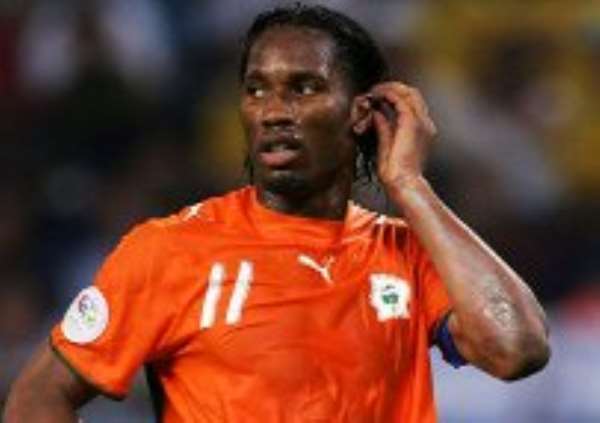 Title favourites Ivory Coast launch their 2010 African Nations Cup campaign on Monday against Burkina Faso in the Cabinda enclave where the Togo squad were attacked by separatists in a terror attack.

Togo had decided to withdraw late on Saturday but early Sunday the players opted to stay and play, one of them Thomas Dossevi told AFP.

The 'Elephants' finished second and fourth in the last two editions of the biennial African football showcase and the media jury have reached a unanimous verdict that they will go all the way this time in Angola.

A glance at the 23-strong squad reveals why the burden of favouritism must be carried by a team containing stars from some of the strongest and wealthiest European clubs.

All the other players under the charge of Bosnian coach Vahid Halilhodzic are with European clubs bar third-choice goalkeeper Vincent de Paul Angban of perennial domestic champions ASEC Mimosas.

Burkina Faso, defeated 3-2 at home and 5-0 away by the Ivorians in the 2010 qualifying competition, have little to offer in return with only striker Moumouni Dagano creating international headlines last year.

He overshadowed Drogba and fellow African superstars Samuel Eto'o of Cameroon, Michael Essien of Ghana and Frederic Kanoute of Mali by finishing leading scorer with 12 goals in the Nations Cup qualifiers.

But captain Drogba has warned his team-mates to be vigilant, claiming over confidence contributed heavily to a stunning 4-1 semi-final drubbing by Egypt in Ghana two years ago.

"We will be treating every team coming our way in Angola with respect, humility and seriousness. There is no room for complacency as in Ghana. No match is won in advance," warned Drogba in Abidjan.

"From the bottom of my heart I desire to return home with a glorious result which will give joy to the Ivorian people. My team-mates and I will be sweating it out as much as we can."

Halilhodzic, who fears failure to win the Nations Cup will trigger calls for his dismissal five months before Ivory Coast go to the World Cup in South Africa, worries about the readiness of stars like Drogba for steamy Angola.

"We are concerned about all our players' fitness, especially those like Drogba who are involved in so many matches," he told the Daily News in Tanzania, where the Ivorians held a pre-tournament camp.

"Didier is a human being. he is not a machine. Even a machine needs to rest if it is to run effectively and efficiently. It is unrealistic to play two (English Premiership) matches within three days."

Although Ivory Coast have played 68 matches in 17 Nations Cup appearances, it will be the first time they face the Burkinabe Stallions, whose best showing was fourth place under French coach Philippe Troussier as 1998 hosts.