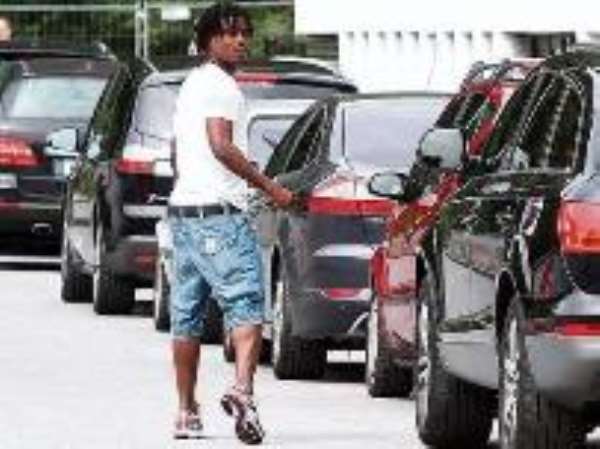 Spain-based midfielder Derek Boateng has denied reports that he asked his club Getafe to snub a late invitation for him to play for Ghana at the African Cup of Nations.

The skilful player was not part of the Black Stars original 23-man squad named by coach Milovan Rajevac for next week's tournament in Angola.

But the Serbian handed a late invitation to Boateng following injuries to John Mensah and John Pantsil but the midfielder could not turn up for the pre-tournament camping in South Africa.

His absence prompted a publication in a Ghanaian newspaper that Boateng intentionally asked Getafe not to release him for the Black Stars claiming heis not a 'replacement player'.

But Boateng has rejected the claims insisting the decision for him not to join the Black Stars was solely taken by his Spanish club.

“I am shocked that a newspaper in Ghana has reported that I asked Getafe not to release me for the Nations Cup,” Boateng said.

“I was happily waiting to get the clearance from my club to allow me to join my Black Stars colleagues in South Africa.

“I was waiting to get my tickets from Ghana to travel to South Africa when the Ghana FA called me to say I will not go.

“It was the Ghana FA official Mr Alex Asante who called me to say that Getafe have written to the GFA to say they will not release me.

“I had given my coach's number to the GFA to convince Getafe officials to release me but unfortunately they did not.

“I didn't even know that they rejected Ghana's request until the GFA told me. I was heartbroken when I was told that.

"I will never turn down Ghana and I am prepared to serve my country any time I am invited."

Boateng was called up as a late replacement after a spate of injuries decimated the Ghana squad in their preparation for the bi-annual competition in Angola.

However, Getafe have refused to accommodate Ghana, stating that the request violates FIFA rules.

FIFA rules indicate that football associations must call up their players for tournaments two weeks in advance before the competition.

Striker Ransford Osei was called up to replace Boateng in the mean time as forward Haminu Dramani will double up forGhana as a winger.

The Black Stars have been decimated by injuries as stars such as Stephen Appiah and Laryea Kingston have been sidelined for the entire competition.

Vice-captain John Mensah and John Paintsil will also be excluded from this edition of the African Cup of Nations through injury.