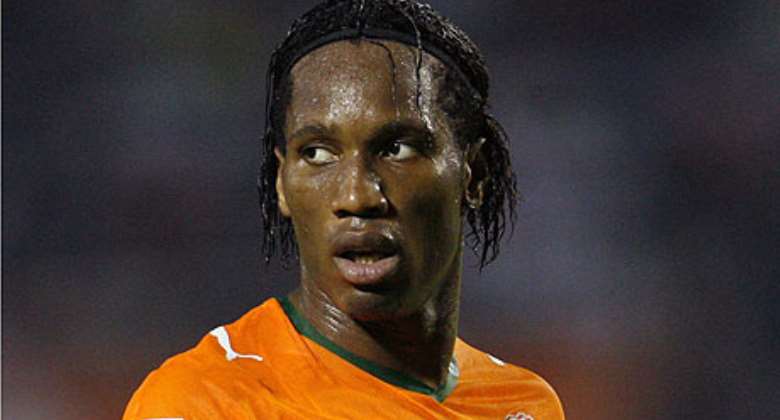 
When England won the World Cup in 1966 the status of African football could hardly have been lower. Seventeen teams boycotted the tournament when Fifa refused to guarantee Africa a place in the finals, and not a ball was kicked in qualifying – despite the fact that more than a quarter of the world body's members were from Africa.

The best players would be taken by European teams, among them Eusébio, the 1966 top scorer who spent the first 18 years of his life in what is now Mozambique but made his name for Benfica and Portugal. Perhaps his performance helped to change Fifa's view, or maybe it was the boycott, but within months of England's victory Sir Stanley Rous, then the most powerful man in the world game, said: "Football in Africa is increasing in leaps and bounds. As they learn something of administration we shall hear much more from them."

Four years later they were given a guaranteed slot, eventually filled by Morocco. Thus the ball was set in motion and now African football is looking forward to its most important year yet, when its status should reach a new level.

Not only will an African nation host the World Cup for the first time, with a highest ever representation of six finalists, but five Africans sit on Fifa's 24-man executive committee. Because of political alliances in other parts of the world, it is those Africans who, in an intriguing twist of history, will have the decisive votes in December when it comes to determining whether England get another chance to win the World Cup as hosts in 2018.

To start this momentous year, however, the continent's showpiece tournament kicks off next weekend when Angola hosts the 27th Africa Cup of Nations. First held in 1957 – three years before Europe staged an equivalent – the Cup of Nations has evolved from humble beginnings to become one of the most eagerly awaited tournaments in the world, featuring some of the finest talent from Barcelona, Real Madrid, Chelsea, Arsenal, Inter and many more of Europe's biggest clubs.

Because the oil-rich host nation is prohibitively expensive – standard hotel rooms in Angola's capital, Luanda, cost more than $400 per night and restaurants charge $30 for a burger meal – there will be few visiting fans and streamlined media coverage.

The favourites are Ivory Coast, their squad packed with players from the top echelons of European club football. The Elephants' biggest strength is their strike force, with Chelsea's Salomon Kalou, Portsmouth's Aruna Dindane and Marseille's Bakari Koné competing to partner Didier Drogba. The midfield includes Barcelona's Yaya Touré and Sevilla's Didier Zokora, while a defence featuring Emmanuel Eboué and Kolo Touré has been generally solid, though it was barely tested as the Ivorians cantered through the qualifiers. Goalkeeper Boubacar Barry, who plays for Lokeren in Belgium, is the perceived weak link of the side, though the biggest hurdle facing the Elephants may be psychological – fresh in the memory is their humiliation two years ago, when they arrived at the tournament in Ghana as heavily fancied favourites but were trounced 4-1 by Egypt, the eventual winners, in the semi-final.

Complacency was blamed for that underachievement, and their disciplinarian new manager, the Bosnian Vahid Halilhodzic, has already taken steps to eradicate any mental slackness, having excluded one of the side's best players, Sevilla midfielder Ndri Romaric, as punishment for turning up late for a qualifier.

The group stages will pit the Elephants against one of the other main contenders, Ghana. The Black Stars boast six members of the team who won the Under-20 World Cup last summer, but will be without two of their established stars: erstwhile captain Stephen Appiah is injured, while Inter's Sulley Muntari has been left out after refusing to apologise for going awol before a friendly in October. Chelsea's Michael Essien also went missing before that game but he has said sorry and is free to resume duty as the team's formidable fulcrum.

Egypt, winners of the last two tournaments, have also lost key players. Talismanic midfielders Mohamed Aboutreika and Mohamed Barakat have been ruled out, as has the former Wigan striker Amr Zaki. The former Tottenham and Middlesbrough striker Mido is not fully fit and has been omitted.

Cameroon promise to be strong. Their manager, Paul Le Guen, has found a way of ensuring star striker Samuel Eto'o does not feel the need to scamper all over the pitch in search of the ball, and the skilful Betis midfielder Achille Emana has become the prime conduit to the Inter star. In the centre of defence Cameroon boast one of the hottest prospects in African football, the 20-year-old Monaco centre-back Nicolas N'Koulou, who has been compared to a young Franco Baresi. What is more, in a tournament where few of the teams have top-class goalkeepers, Cameroon are an exception: Carlos Kameni is excellent.

Another of the continent's traditional powerhouses, Nigeria, look somewhat dilapidated. Though the Super Eagles qualified for the World Cup by edging out Tunisia in the last round of matches, they do not appear to have enough quality players to overcome their usual disorganisation and make a lasting impression. One Nigerian who could be celebrating, however, is Stephen Keshi, manager of Mali, who look best of the outsiders.

Mali can deploy arguably the strongest midfield in the tournament, with Barcelona's Seydou Keita set to line up alongside Real Madrid's Mahamadou Diarra and Juventus's Momo Sissoko. For goals they will look to Sevilla's prolific former Tottenham striker, Fredi Kanouté.

Kanouté caused consternation at White Hart Lane in 2004 when, despite being born in France and having played for that country's under-21s, he declared for Mali, where his parents were born, and jetted off midway through the Premier League season to play in the Cup of Nations. That highlighted a trend that has since become even more prominent.

A decision taken at Fifa's annual congress in the Bahamas earlier this year, following lobbying by the Algerian Football Federation, led to the scrapping of the age limit after which a player used not to be able to switch national allegiance. As a result Algeria, who are in Mali's group in Angola, and England's at the World Cup, are able to call on Portsmouth midfielder Hassan Yebda and Lazio's Mourad Meghni, both of whom were world champions for France, at U17 level, in 2001.

"I was delighted when Fifa changed the law," Yebda said. "The wait for them to make up their minds was agonising. I represented France but my heart is Algerian. My parents were born there, and my brother and lots of other relations still live there." Two other members of that France under-17 team will be in action in Angola – Emerse Faé for Ivory Coast and Chaouki Ben Saada for Tunisia.

Harnessing the diaspora is making African football stronger, but not all of the continent's countries are able to take advantage. Malawi have reached the finals for only the second time but are highly unlikely to survive a group containing Mali, Algeria and the hosts. To the bewilderment of the country's FA, the country's president, Bingu wa Mutharika, refuses to allow the Flames to summon players with dual nationality.

Tamika Mkandawire, the Leyton Orient centre-back who was born in Malawi but is a British subject having moved to London at the age of one, may not have fuelled a trophy challenge by the Flames, but he would certainly have strengthened a squad made up mostly of players from the impoverished Malawian domestic league and the South African second division. "The Malawi FA contacted me a while ago and said they were going to try to get an exception made for me," Mkandawire says. "But the president wouldn't allow it. I'm absolutely gutted that I can't be part of the tournament, especially in what is going to be an amazing year for African football."