Drogba heads to Angola with goal 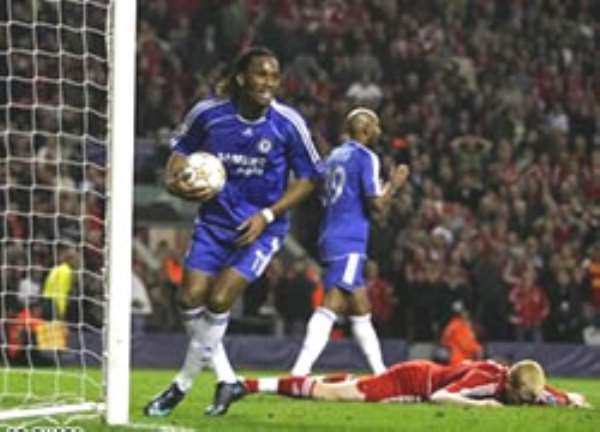 
Chelsea opened up a five-point gap at the top of the Premier League table as they came from behind to beat Fulham.

The visitors stunned Chelsea by taking the lead after four minutes when Zoltan Gera hooked in from 12 yards.

Fulham then defended comfortably as Chelsea struggled to make an impact but Didier Drogba finally got the equaliser when he headed in at the far post.

And an unfortunate own goal by Chris Smalling handed Chelsea a victory that had looked unlikely for long spells.

For much of the match Chelsea looked short of ideas and out-of-sorts as Fulham produced a performance that was full of commitment and excellent defending.

Even without the injured Brede Hangeland, Fulham looked comfortable at the back - until John Pantsil went off injured, and that was perhaps the turning point of the game.

Until then Pantsil had got the better of Drogba in an excellent battle, with the Ivorian striker cutting a frustrated figure.

But in the end Drogba helped give Chelsea the perfect farewell present before he heads off to the African Cup of Nations.

Yet it might have been so different. If ever there was a perfect time for Fulham to play Chelsea, perhaps this was it with the Blues having won only one of their five previous games in December.

Chelsea boss Carlo Ancelotti said after Saturday's 0-0 draw with Birmingham that his side were lacking confidence and that was certainly in evidence.

Right from the start, Chelsea looked off key and when skipper John Terry failed to head away Paul Konchesky's cross, Gera was on hand to hook the ball in after Bobby Zamora had nodded it his way.

A miserable afternoon for Terry continued when he suffered cuts under his eye and on his cheek after a clash with team-mate Yuri Zhirkov, who will not look back fondly on his first Premier League start.

For all their possession, Chelsea barely forced a save from Mark Schwarzer in the first half - the Australian easily gathered two Drogba efforts, while Salomon Kalou dragged a shot well wide.

And just after the break, Zamora should have punished Chelsea when he intercepted Ricardo Carvalho's backpass but Petr Cech made a fine save.

That might have wrapped up Fulham's second victory over Chelsea in the last three decades, but instead they ended up suffering a 17th defeat.

Drogba gave warning that Chelsea were far from finished when he tested Schwarzer with a fizzing shot.

And it was Drogba who hauled his side back into the game when he exploited the space at right-back, after Pantsil had been forced off injured, and headed in Paulo Ferreira's far-post cross.

It was a crushing blow for Fulham but worse was to follow.

Three minutes later, Daniel Sturridge's cross-shot was beaten out by Schwarzer but it hit Smalling and he put through his own net trying to clear.

Kalou clipped the bar with a shot late on, but the result was already harsh enough on Fulham.

Chelsea, however, will be buoyed by a victory that was achieved when they were far from their best.

Chelsea boss Carlo Ancelotti:
"The first half was not good, the second half was better - we played with great determination. It was not easy but we deserved the win.

"In the second half we changed our system, put Didier Drogba and Salomon Kalou out wide and that was better.

"Drogba not only scored but worked very hard and gave strength to the team. It was good for him and for the team."

Fulham manager Roy Hodgson:
"Chelsea had a lot of the ball and we did a lot of defending but that can happen when you take an early lead.

"It's very disappointing to put in such a great performance and have nothing to show for it.

"It would have been nice to have gone away with a least a point - we pushed Chelsea to the limit and we can consider ourselves very unlucky."