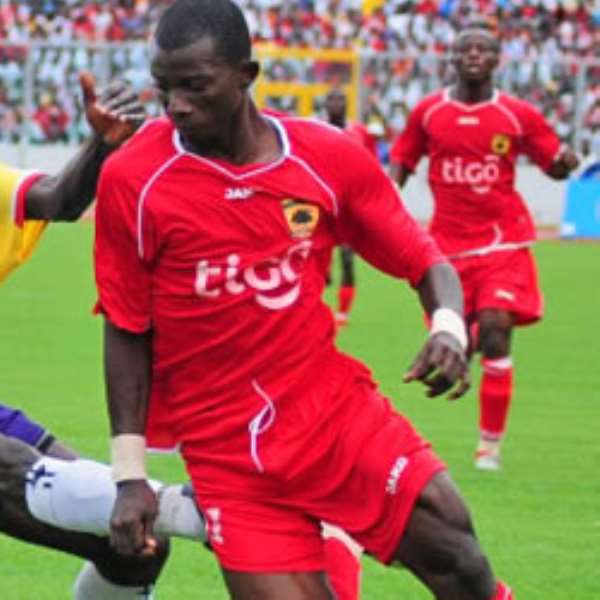 The league's two big sides, Hearts of Oak and Asante Kotoko could not spread any festive cheer around as they could only draw their respective matches before Christmas Day.

Lots of goals in midweek as a total of 20 were recorded from eight grounds but match-day-11 could produce four wins.

Asante Kotoko's winless run to five successive matches after allowing New Edubiase to earn a point in their six-goal thriller at the Len Clay Stadium that ended 3-3.

Having raised into a 3-1 lead before halftime with goals from Charles Coffie, Edward Affum and Samad Oppon, the Porcupine Warriors saw their lead cut as New Edubiase striker, Bansi Seidu who scored twice from the spot kick hit a hat trick to exacerbate Kotoko's frustrations.

Seidu's final goal on the day came in the 88th minute from the spot, leaving coach Paa Kwesi Fabin with four more games to save his job at Kotoko.

Kotoko are still two points better than the bottom-placed team.

In Accra, Hearts of Oak and Eleven Wise treated fans to a repeat of last season's fixture at the Ohene Djan Stadium between both sides as they again drew 2-2.

A Prince Appiah equalizer for the visitors denied the Phobians a third successive victory after Mahatma Otoo and Eric Gawu had given the champions a 2-1 lead following the following a 5th minute opener by William Owusu for Wise.

Leaders, Kessben shared the spoils with Chelsea at the Coronation Park in Sunyani in their goalless draw fixture.

Aduana Stars have moved second after ending All Stars' four-game winning run at the Dormaa Park where they won 1-0.

Liberty Professionals' miseries continued at the Tamale Stadium where they were thumped 0-3 by home side, Real Tamale United. The win sends RTU to third on the table.

Hasaacas moved out of the relegation zone after beating Great Olympics 2-1 at the Sekondi Sports Stadium.

King Faisal failed to lift themselves off the bottom of the table as they could only draw 1-1 with AshantiGold at the Baba Yara Stadium.

Faisal opened the scoring in the 35th minute through Emmanuel Odoi Nsakie but Emmanuel Adjetey leveled up for Ashanti Gold two minutes before the break.