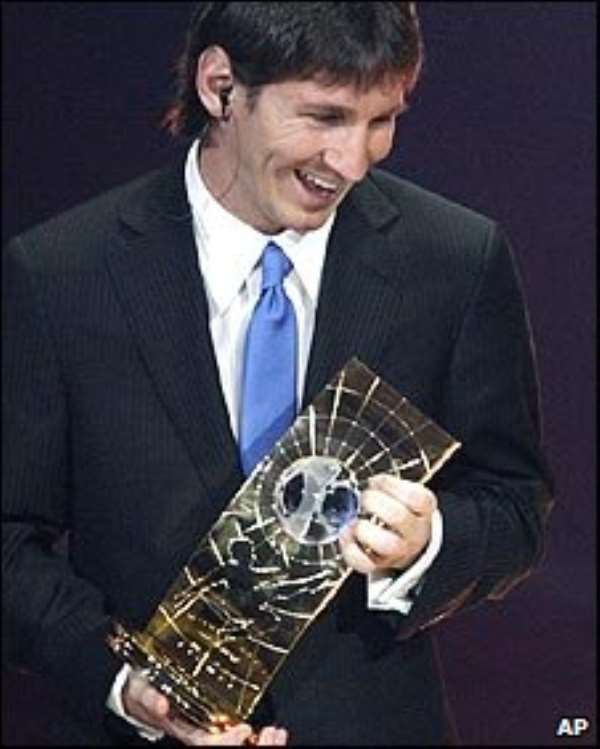 
Barcelona star Lionel Messi has been named Fifa World Footballer of the Year to complete a stunning 2009 for the Argentine forward.

The 22-year-old, who helped Barca win the Club World Cup on Saturday - their sixth trophy of the year - also won the Ballon d'Or award this year.

"A magnificent year for me and Barca has ended in the best way," said Messi.

Messi becomes the first Argentine to win the award, which was inaugurated in 1991, and it completes a stunning year for the brilliant winger.

He helped Barca to an unprecedented treble of Champions League, La Liga and Spanish Cup last season, scoring the second goal in their 2-0 win over Manchester United in Rome in May.

This season the Catalan club have added the Spanish Super Cup, European Super Cup and Club World Cup to their roll of honour, beating Argentine side Estudiantes in Abu Dhabi to complete a stellar year.

At the start of the month, Messi beat Ronaldo to the European Footballer of the Year award by a massive margin - 473 points to 233 - and has now succeeded Ronaldo to win the Fifa award too.

However, Messi has played down the attention, saying: "No, please, I am not king of the world now, nor the number one, I don't believe in those things.

"I am the same person as always and I have the good fortune to play in a great team. It was an historic year for Barca and for me but it's thanks to the work of everyone."

At a glittering gala at the Zurich Kongresshaus, England stars John Terry and Steven Gerrard were named in the FIFPro World XI, voted for by their fellow professionals.

Cristiano Ronaldo won the inaugural Fifa Puskas Award for the best goal of the year for his stunning 40-yard strike while playing for Manchester United against FC Porto in the quarter-finals of the Champions League in April.

The 31-year-old Smith, who plays her club football in the United States, starred in the England side that reached the final of Euro 2009.

"This is a real honour for me," said Smith. "It was tough for me to leave my home country because I'm very proud and passionate to be English.

"I just wanted to be amongst the best players in the world and that's certainly the case and I'm now pursuing my dream."