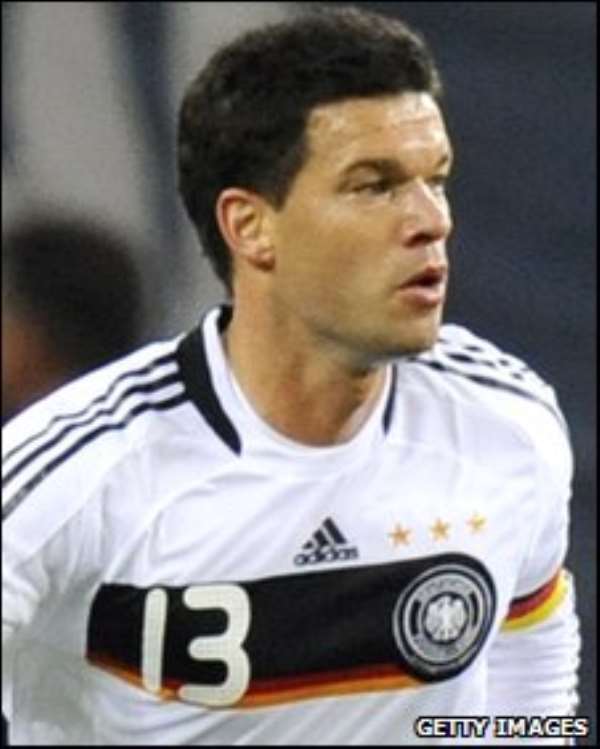 Germany captain Michael Ballack says his side are not among the favourites to win next year's World Cup.

Their group also includes Australia, Serbia and Ghana and the 33-year-old Chelsea star believes getting through that will be a challenge in itself.

"We do not have the consistency or strength in depth in the squad," Ballack told Kicker magazine.

"We have been too weak, particularly in friendlies, to be able to say that we have the class to beat everybody else."

That said, Germany have a well-deserved reputation as high achievers at the World Cup, whether they have the best players or not.

They have qualified for every one of the 16 World Cups they have entered and reached the last eight or better every time since 1938.

But Ballack added: "You can forget about us having had the luck of the draw - we have a tough group and all three opponents are uncomfortable and physically very strong.

"We are going to have to put our foot down from the very beginning. Focusing on big games has always been one of the strengths of German teams."

Germany, coached by Joachim Low, are likely to rely heavily on Ballack, along with the likes of fellow midfielders Bastian Schweinsteiger and strikers Lukas Podolski and Miroslav Klose.

Germany's next game before the World Cup is a friendly against Argentina in Munich on 3 March.