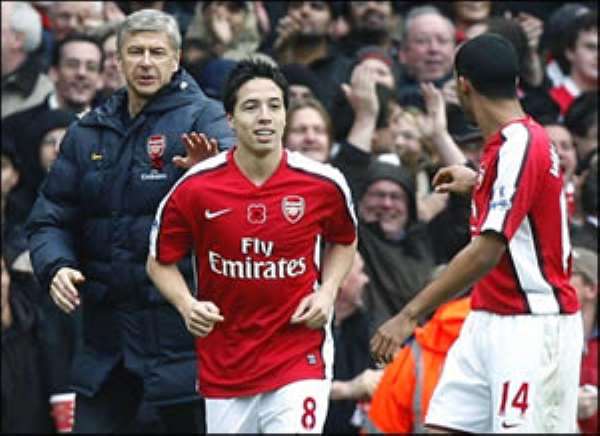 
Andrey Arshavin was Liverpool's tormentor again as Arsenal secured a vital win at Anfield to close the gap on Premier League pacesetters Chelsea and Manchester United.

Gunners boss Arsene Wenger insists his side can still have a big say on the title race - but his bold claims looked in danger of backfiring as Dirk Kuyt gave Liverpool a deserved interval lead.

And the visitors, who were uncharacteristically off the pace in the opening period, were ahead after 58 minutes with a moment of genius that Arshavin is making his Anfield trademark.

The Russian, who scored four goals in four attempts in a dramatic 4-4 draw at Anfield last season, struck in stunning fashion, controlling brilliantly before firing a thunderous shot high past Reina.

Arshavin's magic totally deflated the hosts who, despite having big guns Steven Gerrard, Fernando Torres and Alberto Aquilani on the pitch in the closing stages, barely mounted any meaningful response as Arsenal closed out the victory with ease.

The result does further damage to boss Rafael Benitez's public guarantee that Liverpool will definitely finish in the top four, with Anfield totally subdued at the final whistle as Arsenal dealt comfortably with a succession of aimless long balls.

Arsenal's emotions were in sharp contrast at the final whistle as they responded to an angry half-time team talk from Wenger and celebrated a victory that leaves them only six points behind leaders Chelsea with a game in hand.

Liverpool were able to pair Gerrard and Torres together for the first time since early October as the Spain striker started after making an appearance as substitute in midweek against Fiorentina.

Aquilani made the reverse journey as he returned to the bench after making his full debut in the midweek Champions League defeat - a decision that left the Italian still waiting to make his full Premier League debut after his £20m summer move from Roma.

Torres' return gave Liverpool's attack an extra air of menace in a first half they dominated, exerting almost complete superiority over Arsenal as the Gunners delivered a desperately poor display.

Gerrard served up the perfect opportunity for Torres to mark his return with a goal after 11 minutes when he laid an inviting pass into his path in the penalty area, but Manuel Almunia read the striker's intentions and saved low down.

Liverpool's captain - and indeed the rest of Anfield - was infuriated when referee Howard Webb ignored what looked highly presentable penalty claims as he fell under challenge from William Gallas.

Gerrard received a measure of criticism for going to ground too easily in the area at Blackburn last Saturday, but he had a clear case here.

Kuyt gave Liverpool the lead they deserved five minutes before the interval, and Arsenal keeper Almunia must take a large share of the responsibility. He failed to deal with Aurelio's free-kick under pressure from Lucas, and Kuyt steered home the loose ball.

Arsenal needed a moment of inspiration or a slice of good fortune to ignite a lifeless display, and salvation arrived in the shape of the latter five minutes after the break.

Nasri's cross looked to be posing no serious threat, but a slight touch off Jamie Carragher wrong-footed Johnson, who bundled the ball past Reina.

There was nothing fortunate about the brilliant finish from Arshavin that put Arsenal ahead eight minutes later, taking a perfect first touch before lashing a finish high past the motionless Reina.

It prompted Benitez into making a change after 65 minutes, sending on Aquilani for Javier Mascherano in an attempt to provide an extra touch of creativity in midfield.

Aquilani's arrival failed to provide any spark, and Arsenal were never under serious pressure as they cruised to victory.