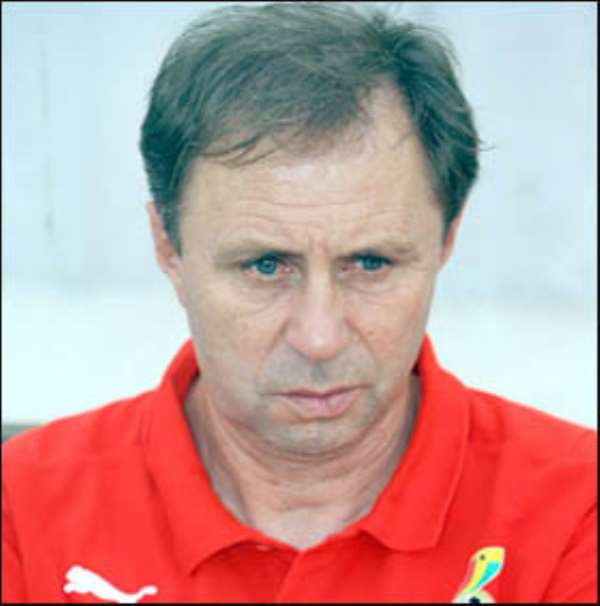 PRESIDENT OF the Ghana Football Association (GFA), Kwesi Nyantakyi, has allayed the fears of soccer fans that national coach will not implement effective strategy for the Black Stars to beat his native country of Serbia during the World Cup 2010.

Ghana was pegged alongside Coach Rajevac's home country of Serbia , three-time world champions Germany and Australia in Group D of the 2010 World Cup to be staged in South Africa.

Since the draw, some skeptics have started expressing doubts as to whether the Black Stars coach would muster the courage to lead Ghana to beat his native country.

But Mr. Nyantakyi, in an interview with Sometimer Otuo Acheampong of Kessben FM, stated: “Coach Rajevac is a professional so he will not do anything untoward when Ghana clash with Serbia.”

The GFA Boss indicated that Coach Rajevac would use Ghana's tie with Serbia to prove to his countrymen that indeed he is come of age in the coaching profession.

Still on Ghana's group, he said, Ghanaians should be happy that the Black Stars are in the same group with Serbia because Coach Rajevac has more information about the Serbian team and this could help the Black Stars to win when the two teams meet.

Mr. Nyantakyi deflated claims by soccer connoisseurs that Ghana's group is cheap, saying, “All the 32 participating teams have the pedigree to lift aloft the golden trophy on the final day.”

He thus pledged the GFA's preparedness to give the national team all the training needed to help put the Black Stars in shape so as to make a mark at the tournament.