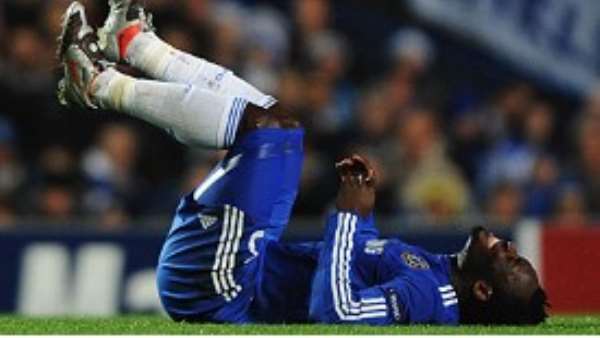 Ghana coach Milovan Rajevac faces a nervous wait to discover how long Michael Essien will be out action for after the midfielder suffered injury last night.

The Black Stars player limped off with a hamstring injury during Chelsea's 2-2 draw against APOEL Nicosia in the Champions League.

With the African Cup of Nations just four weeks away Black Stars' Serbian coach will be keen to know if one of his key players will be available for the tournament.

Chelsea boss Ancelotti was already frustrated after watching his side fail to win for the third successive match thanks to a sloppy display capped by John Obi Mikel's costly mistake.

And the prospect of being without Essien, one of the few Chelsea stars to emerge with any credit from Tuesday's Champions League draw with the Cypriot champions, ensured he left Stamford Bridge in a foul mood.

The Italian admitted Essien, who limped off soon after scoring a thunderous first half equaliser, is certain to miss Saturday's home game against Everton and a scan on Wednesday will reveal if the midfield tyro will be sidelined for much longer.

"Michael has a problem with his leg. We will look at him over the next few days and check on him on Tuesday," Ancelotti said.

"We hope it's not a big problem. I think he will not be able to play on Saturday."

Captain Stephen Appiah has been ruled out of action for three weeks because of a similar injury which could make him available few weeks before the tournament.

Deputy captain John Mensah has been struggling with a calf injury at English side Sunderland while strikers Matthew Amoah and Asamoah Gyan are prone to injury.

With the African Cup of Nations set to kick off on on 10 January, Rajevac must be keen for his players to be fully fit for the tournament in Angola.

Ghana are in a tough group to play Ivory Coast, Burkina Faso and Togo in Group B of the African Cup of Nations.