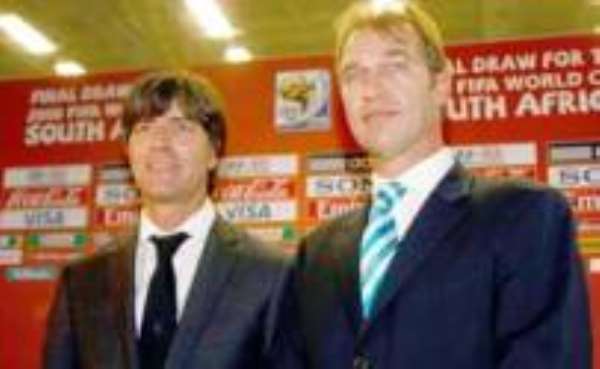 Germany coach Joachim Loew expects his side's Group D to be one of the tightest and relishes an opportunity of meeting Ghana next June at the 2010 World Cup finals.

The 2006 hosts were placed in Group D together with Ghana, Australia and Serbia and Loew is not taking any of the three opponents lightly.

"We have lots of respect for Serbia and I have seen some of their games from the qualifiers on DVD and saw how they left France clearly behind them," he said.

"And Ghana are not an outsider either. Along with Algeria and the Ivory Coast, they are one of the strongest teams.

"They did well in Germany (in 2006) and I think they knocked Brazil out and they have Michael Essien, who Michael Ballack knows well. He is a top-level player."

Germany's final group game will be against Ghana in Johannesburg, not too far away from the base they have selected for the duration of the tournament.

"We are happy to play our third and potentially decisive game close to our hotel," said Germany's team manager Oliver Bierhoff.

Ghana are the team causing Bierhoff the biggest headache and he admitted that he would have preferred to draw a South American opponent rather than one from Africa, who he claims "enjoy a bit of home advantage."

"But we have to take what we have got," he added.