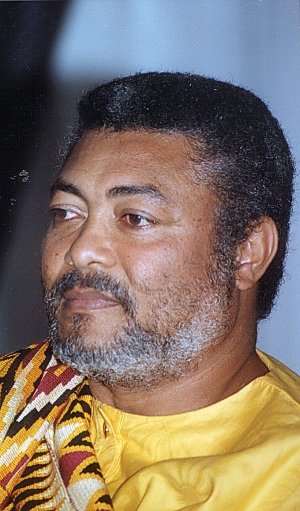 The former President, Flt. Lt Jerry John Rawlings has stated that the high level of integrity demonstrated by his government, constitutes the greatest challenge to the NPP administration. He was addressing a group of NDC supporters who called on him at his residence in Accra on Monday to express their solidarity with him. They were drawn from the party's branches in Yilo Krobjo, Lower and Upper Manya-Krobo, and the Asuogyam constituencies in the Eastern Region. They carried banners, one of which read “Eastern Region NDC supports positive defiance.” Flt Lt Rawlings repeated his description of the present government as the worst in the history of the nation. He urged supporters of the party not to limit the responsibility of exposing the truth to the public to only executives of the party. According to him, failure by the people to condemn wrong doing by government officials at the right time will not augur well for the nation. He said the citizenry must therefore do the right thing at all times, and defend the truth. The General Secretary of the NDC, Dr Josiah Aryeh said to build a strong nation, freedom of expression must be upheld adding that lies and rumour-mongering are unhelpful to national development. The NDC MP for Lower Manya Krobo, Hon. Michael Nyaunu defended the former President's call for positive defiance against wrong-doings of the government. He said Flt Lt Rawlings has the right to express his views on the administration of the country.

Ivory Coast vote hit by unrest over Ouattara's re-election b...
59 minutes ago