Unearthing the truth of Guinea 'bloodbath' 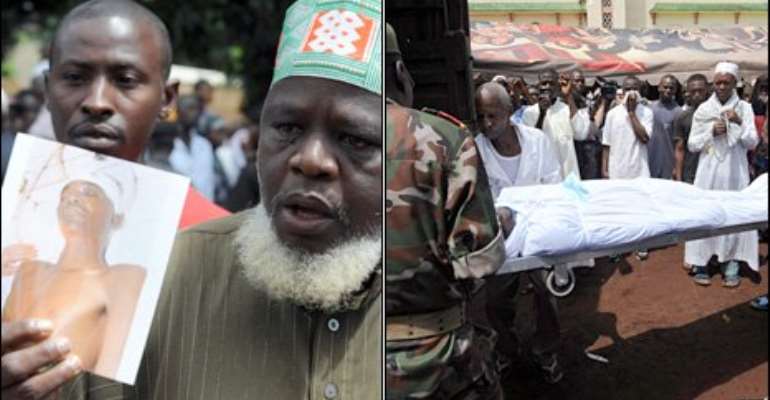 A United Nations Commission of Inquiry is beginning an investigation into a mass killing in Guinea, described as a "bloodbath" by one UN official.

The three-person commission will look into the violent suppression of a pro-democracy demonstration in the national football stadium on 28 September.

"It will try to establish the facts, classify the crimes and determine who was responsible," said a diplomat well-informed about the mission, but who requested anonymity.

Guineans made consistent and detailed allegations about how the security forces attacked the crowd in the stadium.

Soldiers - including members of the Presidential Guard - opened fire on unarmed civilians who were holding a rally calling on the military government to leave power.

"The firing was directed at the people, at the demonstrators," one man who was at the stadium on 28 September said. As with most of the people I spoke to, he requested anonymity.

"This was not firing to scare people away, this was meant to kill. People got hit by bullets, people got trampled, I leapt over bodies, bodies that were lying in pools of blood."

Another man described seeing "hundreds of dead" and "thousands of people injured".

"It is not an army of the people," he said. "This is an army that massacres."

'Stalin would blush'
Women told stories of being raped and beaten by soldiers.

Capt Camara has admitted he is not in complete control of the armed forces
"They hit me again and again. They tortured me. They took a piece of wood and then they tried to push it inside my vagina," said a woman who attended the rally with her younger sister.

"They were raping others around me, some with pieces of wood. One cousin of mine, they raped her with the muzzle of a rifle."

There were accounts of bodies being taken away by men in uniform and rumours of secret mass graves.

An inquiry by Human Rights Watch concluded that the killings constituted a "premeditated massacre of at least 150 people".

Diplomats based in the capital, Conakry, who also requested anonymity, said the violence was "an outrage" and "a massacre".

One diplomat said the killings and the rapes - carried out brazenly, in public - "would have made Stalin blush".

The military government - known widely in Guinea as "the junta" - said 57 people died in and around the stadium, some of them crushed in the surging crowd.

Ethnic politics
The junta leader, Captain Moussa Dadis Camara, said he was not in complete control of the armed forces.

He claimed that military command structures had been confused since independence from France in 1958 and said it was unfair to expect him to have brought matters under control in just a few months.

The UN commission is arriving at an extremely sensitive time.

A senior US official, William Fitzgerald, has accused the junta of recruiting South African mercenaries to train ethnic militias loyal to Captain Camara.

It is an open secret in Guinea that there are tensions within the armed forces.

The most obvious manifestation of this is that a captain, a relatively junior rank, is in charge of a government which also contains officers such as majors and at least one general - all of whom should in theory outrank him.

But potentially more dangerous is the theory among many political analysts in Guinea that Capt Camara's relatively small ethnic group - in fact a combination of tribes from the far south of the country known as the "Forestiers" - appear to think it is "their turn" to rule irrespective of any democratic mandate.

The analysts say Capt Camara and his colleagues believe that the Soussou - the ethnic group of former President Lansana Conte - have had their turn.

And since one of the largest ethnic groups, the Peul, dominate the economy, it is now the Forestiers' right to run the administration.

'Fabric of impunity'
Although there is no obvious external threat - and Guinea has a much larger army than its neighbours - senior military officers travel around the capital in heavily armed convoys as if they fear for their own safety.

Several civilian ministers have resigned since the killings on 28 September in an attempt to distance themselves from the junta.

Attempts to bridge the gap between the civilian political parties - most of which were represented at the pro-democracy rally in the stadium - and the military have not advanced.

The civilian parties have simply demanded that the military leaves power.

The West African grouping Ecowas has also called on the soldiers to step down and promise they will not stand in and election due next year.

But Capt Camara has failed to make this promise.
Strangely, an Ecowas-appointed negotiator, President Blaise Compaore of Burkina Faso, subsequently offered Capt Camara a deal which would allow him to stay in power and later stand in the election. Mr Compaore is a former military man himself.

Guinea has a much larger army than its neighbours

The UN commission is led by a former Algerian foreign minister and judge, Mohamed Bedjaoui.

He is assisted by two women, Francoise Ngendahayo Kayiramirwa of Burundi (a former minister in her country) and the senior lawyer Pramila Patten of Mauritius.

The three are backed by a small secretariat of human rights investigators working under the umbrella of the UN High Commission for Human Rights.

The Geneva-based Human Rights Commissioner, Navi Pillay, said shortly after the killings at the stadium that "[the] bloodbath must not become part of the fabric of impunity that has enveloped Guinea for decades".

Full co-operation
Diplomats said Mr Bedjaoui and his colleagues on the commission intend to get to the truth of what happened on 28 September - but are also deeply concerned about protecting witnesses who testify to the events.

The great fear among civilians in Guinea is that tensions between the soldiers could mount if it becomes apparent that some of them intend to "sacrifice" other military men to the enquiry.

Some of the officers and men present at the stadium were filmed on video or mobile phones. They may be among the first to be called to explain their actions.

But although the junta has promised full co-operation with the UN enquiry, it is not clear what could happen if the commission's work is blocked in any way.

The UN body could find fruitful avenues of enquiry, for example, within the sprawling military headquarters, Camp Alpha Yaya.

Some reports say individual officers have set up military strong points within the camp - and some of the persistent rumours of secret mass graves say they are "in military camps".

But well-informed sources say that experienced organisations with a permanent presence in Conakry, such as the Red Cross, have been denied access to Camp Alpha Yaya.

The commission only plans, in the first instance, to spend 10 days in the country.