Plodders Have a Place, but Is It in a Marathon? 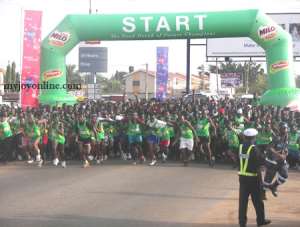 
Every weekend during this fall marathon season, long after most runners have completed the 26.2-mile course — and very likely after many have showered, changed and headed for a meal — a group of stragglers crosses the finish line.

Many of those slower runners, claiming that late is better than never, receive a finisher's medal just like every other participant. Having traversed the same route as the fleeter-footed runners — perhaps in twice the amount of time — they get to call themselves marathoners.

And it's driving some hard-core runners crazy.
“It's a joke to run a marathon by walking every other mile or by finishing in six, seven, eight hours,” said Adrienne Wald, 54, the women's cross-country coach at the College of New Rochelle, who ran her first marathon in 1984. “It used to be that running a marathon was worth something — there used to be a pride saying that you ran a marathon, but not anymore. Now it's, 'How low is the bar?' ”

Tens of thousands of runners are training for marathons this time of year. As the fields continue to grow — primarily by adding slower runners — so has the intensity of the debate over how quickly an able-bodied runner should finish the once-elite event that is now an activity for the masses.

Purists believe that running a marathon should be just that — running the entire course at a relatively fast clip. They point out that a six-hour marathoner is simply participating in the event, not racing in it. Slow runners have disrespected the distance, they say, and have ruined the marathon's mystique.

Slower marathoners believe that covering the 26.2 miles is the crux of the accomplishment, no matter the pace. They say that marathons inspire people to get off their couches, if only to cross off an item on the Things to Do Before I Die list. And besides, slow runners are what drive the marathon business, they say.

John Bingham, a runner who is known as the Penguin, is often credited with starting the slow-running movement, in the 1990s. “I have had people say that I've ruined the sport of running, but what I've been trying to do is promote the activity of running to an entire generation of people,” he said. “What's wrong with that?”

Bingham added: “The complainers are just a bunch of ornery, grumpy people who want the marathon all to themselves and don't want the slower runners. But too bad. The sport is fueled and funded by people like me.”

Trends show that marathon finishers are getting slower and slower — and more prevalent — according to Running USA, a nonprofit organization that tracks trends in distance running. From 1980 to 2008, the number of marathon finishers in the United States increased to 425,000 from 143,000.

In a debate on the Web site slowtwitch.com, someone posting as Record10 Carbon wrote that more than half of the people at a marathon are just overweight and “trying to get a shirt and medal ... looking to one day tell a story about the saga and the suffering of their 11 minute pace 'race.' ”

In response, someone wrote: “Being a participant isn't bad. Yes, there should be a cutoff on some events. But, what that cutoff is can be a raging debate.”

Race directors often struggle to find the right cut-off time, when water stations are closed, roads open to vehicles and volunteers abandon the course. Some directors, however, avoid that problem.

Runners in the Honolulu Marathon have no limits. Race rules state, “All runners will be permitted to finish, regardless of their time.”

Last year, 44 percent of the field for that event finished in more than six hours — with some marathoners stopping for lunch along the course.

“For every race director, there's a very fine line between putting on a community event and putting on a race,” said Chris Burch, race director for the Des Moines Marathon, which stays open for seven hours. Last year, it stayed open for eight hours, but Burch found that only 4 percent of the participants needed more than seven hours to finish. In the end, that extra hour was not worth it, he said, because of the costs of keeping the course open.

“It is a huge budget item because you have to pay municipal services, like police, fire or trash, and volunteers have to stay longer,” he said. “But it's not a simple decision. Those back-of-the-pack runners are income for the event, too, and they're just as important for everyone. There's a feeling of 'I paid as much money as the other people to enter, so I should be treated the same.'”

At the Marine Corps Marathon, runners must keep a pace of 14 minutes per mile or risk being booted from the event near the 20-mile mark. A bus looms there, waiting to pick up those who fail to cross the 14th Street Bridge before it reopens to traffic. Those who choose to continue on the open course do so at their own risk, taking to the sidewalks or dodging traffic.

At the Berlin Marathon, where the cut-off time is 6:15, the “slow police” are notorious for lurking at the back of the pack. “If runners aren't able to finish in the time we put in our information book, we ask them to leave the course and find their way to their hotel, or get in the bus,” the race director Mark Milde said.

The New York City Marathon, scheduled for Nov. 1, will have a field of about 40,000. Last year, about 21 percent of the field finished in more than five hours. The race officially ends after 6:30, though runners are scored through 8:40, when the timing system is finally carted off, said the race director Mary Wittenberg.

Longtime marathoners like Julia Given, a 46-year-old marketing director from Charlottesville, Va., still find ways to differentiate the “serious runners” from those at the back of the pack.

“If you're wearing a marathon T-shirt, that doesn't mean much anymore,” Given said on the eve of this month's Baltimore Marathon, where vendors were selling products that celebrate slower runners. One sticker said: “I'm slow. I know. Get over it.”

“I always ask those people, 'What was your time?' If it's six hours or more, I say, 'Oh great, that's fine, but you didn't really run it,' ” said Givens, who finished the Baltimore race in 4:05:52. “The mystique of the marathon still exists. It's the mystique of the fast marathon.”