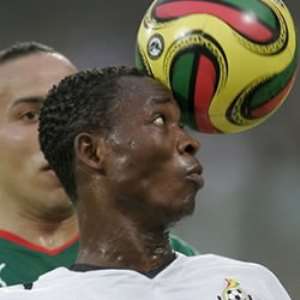 Five Ghana internationals would take part in the Europa League play-off after helping their clubs reach the last qualifying round.

Matthew Amoah, Mohammed Awal Isaah, Samuel Yeboah, John Paintsil and Samuel Inkoom were all in action as their clubs advanced in the competition.

But the same cannot be said for Dominic Adiyiah, Joe Tex Frimpong, Issah Ahmed and David Addy as their sides were eliminated on Thursday.

Striker Mathew Amoah, again scored one of NAC Breda's goals in their 3-1 win over Polonia Warszawa.

Amoah opened the scoring for Breda in the 25th minute to help the Dutch side wrap up a 4-1 aggregate win at the Rat Verlegh Stadion.

Samuel Inkoom returned to the FC Basel team that advanced 5-3 on aggregate following a 3-1 win over Icelandic side KR at home.

John Paintsil played for 78 minutes as Fulham thumped Vetra of Lithuania 3-0 to progress 6-0 on aggregate.

Black Satellites striker Dominic Adiyiah played for 83 minutes as Fredrikstad beat Lech Poznan 3-1 away but bowed out on aggregate.

Joe Tex Frimpong scored late on but it came too late to salvage Young Boys exit as they lost 1-2 to Athletic Bilbao at Stade de Suisse.

Ghana duo Issah Ahmed and David Addy were in the Randers FC starting line-up that beat Hamburg 1-0 but exited the competition.

Addy was substituted after an hour of play.