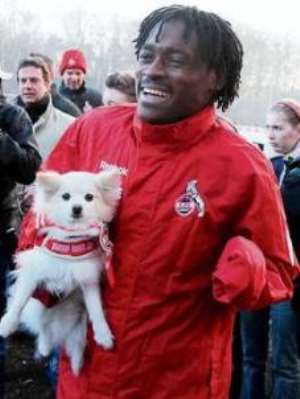 Ghana's Germany-based midfielder Derek Boateng is set to complete his shock switch to Spainsh La Liga side Getafe atfer a transfer fee was agreed on Friday.

This comes after his club FC Cologne agreed transfer fee for the enforcer  to join Getafe, six months after joining the Bundesliga side.

The 26-year-old will sign a four-year deal on Monday if he passes a stringent medical test.

Cologne agreed to release Boateng from his remaining18-month contract for a fee because they have many options in midfield.

"In Boateng's position, we have too many players of the similar style of play so the decision was fairly straightforward," said Cologne coach Zvonimir Soldo.

Boateng has already arrived in Spain but will undergo the medical on Monday before being introduced to fans of the club.

The Ghanaian seemed to have settled very well with the German side after just six months at the Bundesliga club.

But the arrival of Portuguese midfielder Maniche means there could be less playing time for the Ghanaian at the Bundesliga side next season.

This prompted the offer from Getafe who are seeking to strengthen their midfield after they struggled in that department last season.

I Wish You Die In Prison — Judge To Convict Who Defiled His ...
9 minutes ago