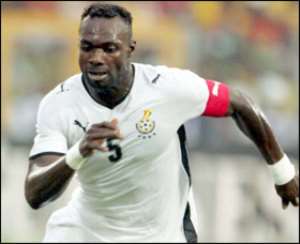 says he is shocked by reports that Olympique Lyon intends to offload him before the start of the French season.

Mensah played for 90 minutes in Lyon's 0-2 loss to FC Porto in the Andalucia Peace Cup in Huelva Spain, but he later revealed to Kickoff Ghana that he was part of Lyon's future as long as he was concerned.

“I have had a chat with the Club coach when I came back and nothing has been said about letting me go,” he said. “We have only talked about staying fit this season.”

Lyon president, Jean-Michel Aulas said last week that they were willing to let their 8 million Euro investment go, if a good offer comes in. Meanwhile, Coach Claude Puel has suggested that “Mensah can walk.”

“The thing that surprises me about these reports is that over the last few weeks there have been offers from West Ham and Monaco that will have met Lyon's valuation, but they turned them down.

I don't get the impression that this is a club that wants me to leave,” he further reiterated. Mensah's first season at Lyon was plagued by injuries and red cards, but he is confident of being fully fit to help the French champions claim back their title this season.