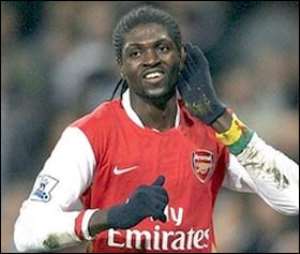 Adebayor passed a medical on Wednesday and now looks set to move to Eastlands after being given permission.

The Togo striker, who has spent three-and-a-half seasons at Arsenal, is believed to be valued at £25m.

The 25-year-old, who scored 16 times for the Gunners last season, has also been linked to AC Milan and Chelsea but has chosen to join Mark Hughes' men with a weekly wage of £170,000 being reported.

Adebayor will be City's third striker signing this summer, and will join target-man Roque Santa Cruz and Argentine forward Carlos Tevez on the club's summer tour.

Reports have suggested that Bordeaux striker Marouane Chamakh, who helped the club to a domestic title, could be Premier League-bound to replace the Togo man; but with Stuttgart stalling over a move for Klaas-Jan Huntelaar, who is deemed surplus to requirements at Real Madrid, the Gunners may move for the Dutchman instead.