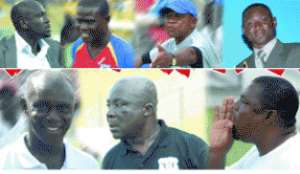 Sunday’s battles of fate across some of the Premier League’s famous centres will evoke emotions of the strongest form as traditional sides and the ‘new order’ cross swords in separate ambitions in an absorbing ending to the current league season.

From Accra to Wa, Kumasi to Kpando, Sunyani to Sekondi, and Tema to Tamale, passion and unyielding nerves will rule as the league decides its new champions, and the two other clubs to accompany Sporting Mirren to the Division One League.

With the league having transited from a one-horse race to about the most competitive ending in a decade, league leaders Hearts of Oak and defending champions and second-placed Asante Kotoko are caught in nervy last games, while an unprecedented squad of five, in the least, contend with a possible drop to the Division One League.

So high are the stakes that even Mirren’s status as DOL-bound and whipping boys of the premiership easily give way to some amount of hope that the upsets that have transformed the terrain into its current competitive nature will be sustained when they face Hearts in Accra.

The mathematics of the possible results from that match have given the Kumasi tie between city rivals Kotoko and King Faisal its own hype, as the coming into force of the head-to-head rule has quashed any hopes third-placed Heart of Lions might have nursed to upset the odds.

But while the giants stage their separate combats, the almost physical tension prevailing in the two camps in Accra and Kumasi is being rivalled in Sekondi (Wise), Wa (Hasaacas), Tema (All Blacks) and Tamale (RTU and Ashantigold) where survival instincts are being stretched to the limits.

In Tamale especially, RTU will attempt another escape mission on the final day of competition, this time against Ashantigold (and not Zaytuna), hoping to bring to naught the splendid comeback story of Ashantigold.

Ashantigold are on the verge of an astounding comeback effort following the rehiring of Coach David Duncan and chief executive Kudjoe Fianoo when the club slumped into the relegation bracket and were considered no-hopers.

Their destiny is now tied to the fate of RTU, another of the more established sides in the league whose coach, Abdul Razak, is also confronted by the daunting duty of steering them into safe waters.

Like both RTU and Ashantigold, other traditional powerhouses such as Hasaacas, Wise and All Blacks are caught in the unfriendly relegation zone.

And each of them could slip down with their technical helmsmen who have either endeared themselved to the field or incurred the displeasure of their fan base.

Despite Mirren’s fate, Coach E.K. Afranie is full of pride as he leads them against Hearts whose coach, Nii Noi Thompson, has endured a difficult term in the one month he has been in charge of the Phobians.

For Herbert Addo, he has etched his name in golden letters already since taking charge of Kotoko, while the charisma of C.K. Akonnor and Odartey Lamptey have hardlly been matched in real results, except in games against Hearts and Kotoko.

And for all the others who have graced the league, Sunday will be remembered for long, whichever way fortune swings at the end, as Wise play Kessben at Sekondi, Tema Youth welcome All Blacks to Tema, Chelsea and Liberty clash at Sunyani, Lion take on Arsenal at Kpando, and All Stars confront Hasaacas at Wa in the other matches.