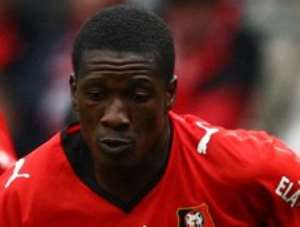 GYAN IS HOPING FOR AN INJURY FREE SEASON The medical team of French Ligue One side Rennes have passed Ghana striker Asamoah Gyan fit for the rigorous pre-season training exercises.

The 23-year-old has been tagged as injury-prone after his first season at the Stade Route de Lorient was marred by injuries.

New coach Frederic Antonetti is determined to make him his lead striker with the departure of Stephane Mbia to Olympique Marseille.

But there are doubts surrounding Gyan's fitness level ahead of the new season as struggled to make 15 league appearances last term.

"During his vacation he had a program of diet and lifestyle to follow, and it was accompanied by the club doctor, who ran with him on the beach," Rennes Physical trainer Nicolas Dyon said in an interview.

In previous seasons, Rennes have lost Roman Danzé and Daniel Moreira to injuries and fear Asamoah Gyan could be their latest victim.