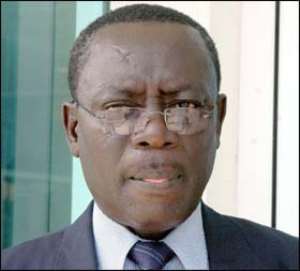 
With one match more to end this year's Glo Premier League controversy seems to have hit the exciting league as several allegations have been leveled against some of the teams, for playing fixed matches.

Among the hardest is an allegation uncovered by Joy Sports that Vincent Odotei, Chief Executive Officer of King Faisal is attempting to bribe players of relegation bound, Sporting Mirren to play it hard, in order beat Hearts of Oak, who are favorites to win the 2008/2009 league.

According to reports, Mr. Odotei attempted to influence the game between Hearts and Mirren on Sunday, which will enable him return to the Phobians, where he was the Acting Chief Executive at the beginning of the season.

Similarly, the matches between King Faisal and Kotoko and also All Stars and Hasaacas, which were both played at the Baba Yara Stadium, are being alleged to have been influenced. Whilst Kotoko badly need a win to stand any chance of wining the league, in a situation where Hearts slips, Hasaacas must also win to remain in the premier league for next season.

Other matches, regarded as important because of the relegation blues that bedevils the teams, will have to be keenly monitored by the Professional League Board (PLB).

Meanwhile, some club officials have reiterated claims that other clubs in the League approached them to play their 28th week matches in a compromised way.

Rev. Osei Kofi, a member of the interim management committee of Kotoko, told CITI Sports that two of his colleagues, were approached by officials of Ashgold to play a match of convenience which has been denied by Kojo Fianoo, Chief Executive Officer of Ashgold.

Similarly, Berekum Arsenals have angrily rebuffed rumors that they played a match of convenience against Hearts of Oak, as the one-all draw game at the Golden City put the latter in good position to win this year's league. Before the match, it was speculated that Arsenals had been paid an amount of Gh40,000 cedis by Hearts of Oak to aid their title winning campaign.

But Arsenals team manager, J.A Awudu told Joy FM that “All these are allegations; if you look at it, Kotoko lost four successive matches in Kumasi, and Hearts of Oak also lost in Accra; but these were not considered as fixed matches. Why then should people have that perception?”

The match between King Faisal and Tema Youth were alleged to have suffered the same fate.