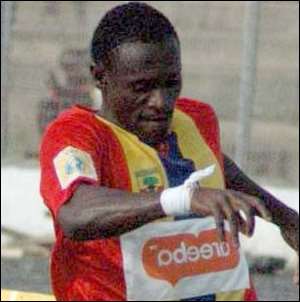 With one match more to play, Accra Hearts of Oak appears to be cruising to their 20th league win after they played 1-1 draw game with Arsenal, at the dreaded Brekum Golden City Park.

Francis Bossman put Hearts in the lead in the 15th minute via a spot kick, but Arsenal responded in the 85th minute when Stephen Amankwah got the most important equalizer through a spot kick.

The draw, thus puts the Phobians one point ahead of rivals Kotoko, who lost 1-2 to Ashgold, at the Obuasi Len Clay Sports Stadium. On Sunday, the Phobians will battle Sporting Mirren, in the ultimate match of the season which will determine the winner of the Glo Premier League.

At Obuasi, Kotoko failed to beat Ashgold at the Len Clay Sports Stadium when they lost in the penultimate match.

However, a bizarre incident occurred at the stadium when fans threw stones onto the pitch, forcing the security officials at the stadium to retaliate by firing tear gas. According to reports, two people are believed to have died.

Meanwhile, the battle against relegation appears to be heightened as the table continues to change prior to final matches of the league.

Giants of the west, Hasaacas, also won 3-1 at the Essipong Sports Stadium to move up to the 12th position with 37 points whiles; Liberty also whipped Wa All Stars 4-1 at the Tema Park. The match between All Blacks and Eleven Wise was rained off and will be honored today.