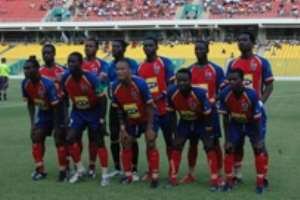 Hearts are back at the top of the league Hearts of Oak regained their control of the Ghana top-flight league in the penultimate game of the thrilling season after holding Arsenals 1-1 in Berekum.

The Accra side opened just a one-point lead at the summit on Sunday with only one match remaining, just three days after their arch rivals and holders Kotoko overtook them.

The Phobians return to the top was aided and firmly abetted by the Porcupine Warriors, who suffered a 2-1 defeat at struggling Obuasi Goldfields in another exciting game.

While the roller-coaster struggle for the title has been thrilling, the battle to stay in the in the Premier League is breathtaking as all the clubs occupying the 8th to the 15th positions will have to go all in next week's final game if they are to beat the drop.

Hearts will need to win their last game against relegated Sporting Mirren to clinch the league title while Kotoko must beat King Faisal and pray that the Phobians drop points in Accra for them to be able to retain their title.

The league which started with little interest from local fans has sprung to life because of the keenness of the competition and supporters are expected to troop the stadia next week for the thrill of winning the league or the heartbreak of playing in the Division One League next term.

Even competition for third place is keen. Kpando Heart of Lions and Faisal will have to battle for that spot due to the one point difference between them.

Victory for both sides in their subsequent games will keep each of them at their respective positions, whilst a slip by any of the sides will see a change in the third and fourth positions of the League.

What remains certain is that Hearts, Kotoko, Faisal and Lions seem to be sure candidates for the 2009 Top Four Competition, since the outcome of the next league matches will not in anyway change standings among the first four on the table.

The participation of the first four teams in the competition is however not automatic as the event has over the years been characterised by pull-outs by qualified Clubs as a result of varying reasons.

The mid- table, however, looks safe for Chelsea, Tema Youth, All Stars and Kessben FC, who will not need much to ensure their survival in the premiership after securing 41, 40, 40 and 39 points respectively.

The relegation struggle however still remains uncertain as the Clubs occupying the eighth to the 15th positions will have to go all out in the 30th Week League games if they are to survive the premiership.

This follows a minimum of two point difference between the eight clubs at the bottom made up of Liberty, Arsenals, Eleven Wise, Hasaacas, Ashgold, RTU and All Blacks and a slip on the side of any of them will see them join the wilderness.

Sekondi Eleven Wise might however jump to the safe mid table if they are able to win their outstanding match against Swedru All Blacks, whilst All Blacks will also need a win in their last game for survival should they pluck the three maximum points at the hands of the Western Show Boys.