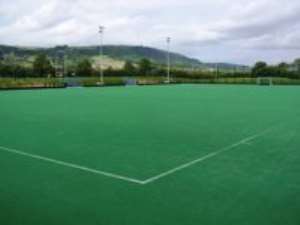 in Accra.
The victory was a face saving one for host nation, Ghana after the male team

suffered a humiliating 8-0 defeat at the hands of South Africa on Friday.

The female team, which now carries the nation's hope of the 'Host and

Win', opened the scores in the 8th minute through Beatrice Darko from a

penalty corner.
Exhibiting a shadow of their male counterparts as showed in the opening

game, the Egyptians struggled to level up but had to face stiff opposition from

the Ghanaian Ladies.
Georgina Sam increased the tally for Ghana in the 30th minute of the first half

from another penalty shot to end the first half on a brighter note.

finding a goal, with the Egyptians keen on fetching a consolation with the likes

of Sayed Sarah and Noura Mahmoud failing to break the back line of Ghana.

The Black Sticks, despite pilling pressure on the Egyptians could not utilize

some of the few chances that came their way.
A last minute effort however fetched the Black Sticks their third and final