League title still up for grabs 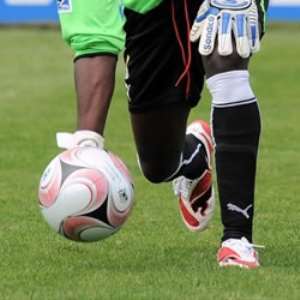 Every match day has remained crucial but as the league reaches the penultimate round this weekend; chances are that a clearer picture would emerge before the final day matches.

The title race is still up for grabs while the two other sides that gets relegated alongside Mirren remains unknown.

Asante Kotoko are sitting top of the standings but not with the comfortable point build-up they would have hoped for.

The Reds lead the table by a superior goals difference to Hearts of Oak with both sides level on 48 points apiece. But victories for both Kotoko and Hearts will mean the league title will go down to the wire.

Kotoko knows that if the season finishes level on points they would miss out of the title to their rivals Hearts due to the use of the head-to-head to determine the winner.

The Reds who are hoping to possibly clinch a back-to-back title success in the Glo Premier League face a difficult away game in Obuasi where they battle with AshantiGold, threatened with the drop, for all three points.

AshantiGold could possibly exit the elite division after fifteen years if they go down to defeat whiles Kotoko could also wave a goodbye to the title if they fail to pick all three points.

Hearts of Oak would be on the road to play Berekum Arsenals at the Golden City Park, a venue which surprisingly lost its invincibility status after the Gunners tasted their first home defeat in five years on Wednesday.

The Phobians have failed to do enough to win the title having allowed a 14-point gap at the start of the second round to whittle to nothing now and also gone winless in their last eight games.

King Faisal still pushing for a rather difficult Champions League spot but a possible top four finish will play Tema Youth at the Baba Yara Stadium.

Heart of Lions, who however stand a chance of playing in another continental competition travel to the Anane Boateng Stadium to play Kessben FC who are seeking to stay clear of the relegation zone.

Liberty Professionals will host All Stars at the Carl Reindorf Park as they attempt to avoid the drop.

Hasaacas need to pick all three points at the Sekondi Sports Stadium where they play Real Tamale United.

Gamba All Blacks, sitting just above the bottom-placed team still battle on in the relegation dog-fight. The Black Magicians host Eleven Wise at the Swedru Park.

Relegated Sporting Mirren will be playing for pride when they take on Chelsea at the Ohene Djan stadium.