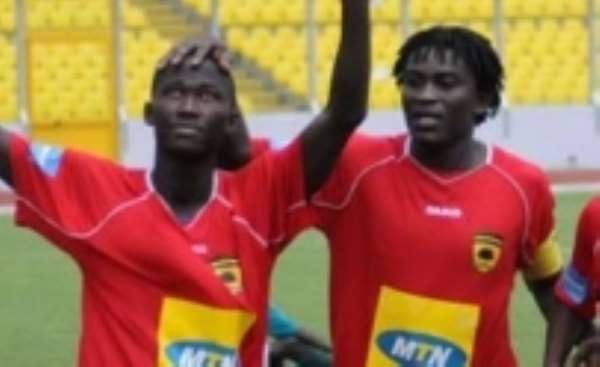 Even though the 'Fabulous' lads struggled to contain the struggling Mirren side, Alex Asamoah's late minute strike was enough for them to close the gap between them and Hearts.

Despite the victory, Kotoko will have to wait for the outcome of the game between Hearts and Wa All Stars on Monday, June 29, which was rained off on Sunday.

A win for Hearts will keep the point gap at four, whilst a draw will further reduce the to two whilst a loss would put Hearts in an uncomfortable situation of a one point lead on the table after taking a 14 point lead as at the close of the first round of the League.

Kpando Heart of Lions also came over relegation threatened Ashgold with a last minute penalty converted by Steven Owusu to keep them on the third position of the league.

However but for another last minute penalty awarded to Berekum Arsenals, which was converted by Steven Amankwah, Kumasi King Faisal would have occupied the second place on the table, after taking an early lead through David Addo for their game to end in a one all draw.

Faisal will now have to manage the fourth place with a total point haul of 42, closely followed by Arsenal with 37 points.

Sekondi Eleven Wise are gradually dropping off their guard as they lost 1-0 to city rivals, Sekondi Hasaacas at the Essipong Stadium, near Sekondi.

Even though the 'Western Show Boys' started the season on an impressive note under the technical guidance of coach Charles Kwabena Akunnor, Wise are gradually pushing themselves into the relegation zone as any further slip will see them battling for survival.

Real Tamale United (RTU) will need at least another win to assure themselves of a stay in the premiership after they defeated Chelsea 2-0 at the Tamale Stadium, with Liberty Professionals also pushing themselves out of the relegation zone after they held Tema Youth to one all at the Tema Stadium.

A critical analysis of the situation suggests a fierce contest in the remaining four matches of the season, as any of the four top clubs are capable of winning the League, whilst relegation continue to scare Clubs occupying the eighth position to the bottom.