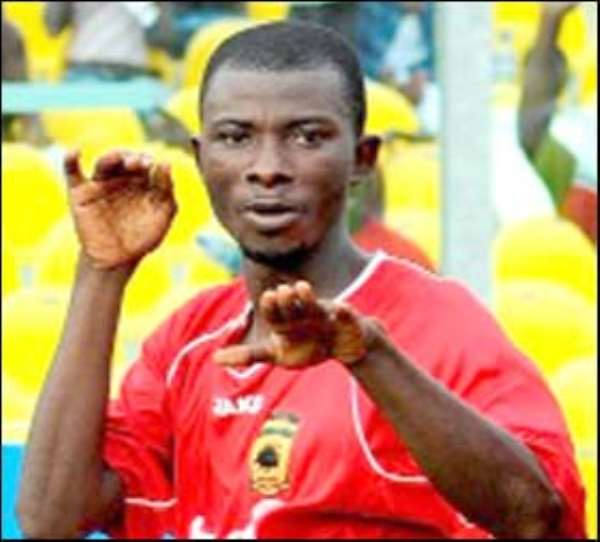 Jordan Opoku Fresh from their vintage performance in Accra where they broke a 16-years-old record, Kumasi Asante Kotoko would today be hoping to consolidate their winning streak lately when they battle the pride of the north, R.T.U at the Tamale Sports Stadium.

Coach Herbert Addo appears to have brought magic to the Porcupine Warriors and is counting on his exploits so far to add the Tamale lads to his victims. The attacking options of Kojo Poku, Alex Asamoah, Kwabena Yaro and Stephen Manu would be very key to the fortunes of the Red Army who go into today's game lying fifth on the league table with 34 points.

Battered league leaders, Hearts of Oak, yet again encounter another difficult task when they play as guests to King Faisal at the Baba Yara Sports Stadium.

Faisal, under Briton Steve Pollack, have been faring well in the league and would thus be hoping to beat Hearts at home.  The Phobians would have to be wary of nimble-footed Ebo Andoh and Micky Ofosu if they are to return home with at least a point.

Elsewhere, impressive Ashgold welcomes Gamba All Blacks to the Obuasi Len Clay Sports Stadium while Chelsea clash with Wise in an all debutants affair in Sunyani.

In other matches, All Stars would be hoping to consolidate their win at home when they welcome Tema Youth at the Wa Sports Stadium.

Also, struggling Hasaacas would welcome Bashiru Hayford's Kessben at Essipong whilst Liberty would be hoping to win their first match under Coach Isaac Acquaye to avoid the relegation drop. Bottom placed Sporting Mirren would also be hoping to improve their stand when they engage second placed Heart of Lions tomorrow in Accra.