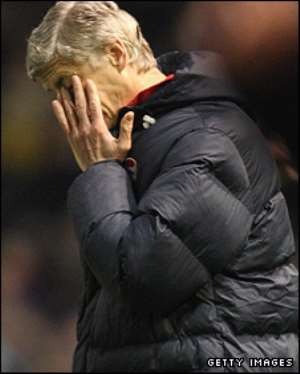 
Arsenal manager Arsene Wenger has promised his side will produce a "magnificent" team display to overcome Manchester United on Tuesday night.

Arsenal trail United 1-0 going into the second leg of their Champions League semi-final at the Emirates Stadium.

"I am very confident the team will produce a magnificent performance and that we will manage it," said Wenger.

"We are aware it's our team performance that will be important rather than the responsibility on any individual."

Only a superb individual performance by goalkeeper Manuel Almunia in the first leg prevented United going into the return match with a far greater advantage.

And Wenger, who will be boosted by the return of leading scorer Robin van Persie, is confident his side can overturn the one-goal deficit.

"Everybody is focused and ready for the game," declared Wenger, whose side lost the 2006 final to Barcelona in Paris.

"We lacked a bit of sharpness in the first leg. We will make sure that sharpness and decisiveness in the duels will be on our side."

Arsenal captain Cesc Fabregas exuded a similar confidence, insisting his team-mates would be ready for the task.

"For most of the players it could be the most important game of their career," claimed Fabregas.

"The first-leg result was not catastrophic at all, it is only 1-0 - we are capable of scoring two goals against Manchester United.

"At home we know we are very strong. We just have to play our game, be confident we can do it, because I know we can do it."

Manchester United boss Sir Alex Ferguson is determined not to repeat mistakes from past as his side aim to become the first to retain the trophy in the Champions League era.

"There have been times in the last few years when we've thrown semi-finals away," he stated. "The Borussia Dortmund semi-final was an absolute throw-away.

"We had so many chances to win the tie, it was amazing how we didn't win it. "There were other occasions like the Leverkusen game we got a bit nervous in the first game and were very, very unlucky in the second game."

Ferguson also revealed he is frustrated to have won the trophy only twice in more than 22 years at the helm of the club.

"My biggest regret is we haven't won it more times," he confirmed.

"We have a terrific history but it is not the same as AC Milan, Real Madrid, Liverpool or Bayern Munich or Ajax. We have regrets about that." However, with United only one game away from the final, the Scot knows his team have a chance at making that record a little more satisfying.

He added: "We have the lead and we are only one kick away from Rome. It is a big incentive for us.

"We have to go there with the intent of trying to score. It is important to have a threat. Hopefully we do score and I think we have the ability to. "If we got the away goal then Arsenal would have to score three. That would put us in a strong position."

Arsenal, though, beat Manchester United at Emirates Stadium in the Barclays Premier League in November and have not lost at home in Europe since their clash with Chelsea at Highbury in April 2004 - 24 matches ago.

And the Gunners have not conceded a goal at home in the competition this season.

"For many people we are outsiders but I personally believe we will do it," insisted Wenger.

"The progress this team has made since the start of the season has been remarkable.