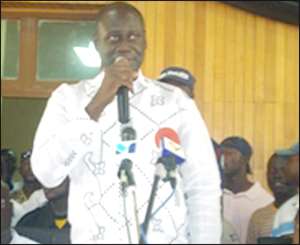 “I thank President John Agyekum Kufuor for the honour done me and I promise to do my possible best to justify the confidence he has reposed in me,” said Mr. Sarpong to the chagrin of the gathered assembly members, invited dignitaries, friends and well-wishers.

This spur-of-the-moment acknowledgement of ex-President Kufuor by the immediate past Ashanti Regional head of the Serious Fraud Office (SFO) caused spontaneous uproar at the KMA conference hall, venue of the programme.

Supporters of the ruling National Democratic Congress (NDC) who stormed the venue to offer moral support to the President's nominee were simply not happy when Mr. Sarpong delightfully thanked ex-President Kufuor instead of President Mills.

Also shocked by Mr. Sarpong's outburst were the Ashanti Regional Minister, Kofi Manu Poku and the Minister of Youth and Sports, Mohammed Mubarak Muntaka who were both present at the confirmation event.

Their shock was so deep that immediately Mr. Sarpong thanked ex-President Kufuor instead of President Mills, the two who were seated close to each other on the high table bowed down their heads for a moment.

The expression of dissatisfaction over Mr. Sarpong's acknowledgement of ex-President Kufuor by supporters of the ruling party was so intense that the less than 10-minutes acceptance and 'thank you' speech came to a halt momentarily.

When sanity prevailed finally, the former SFO boss speedily apologized and restarted his speech; this time round thanking President Mills for appointing him to the high office of KMA chief executive.

On his vision for the metropolis, Mr. Sarpong expressed worry about the spate of armed robbery in the Garden City and promised to work assiduously with all stakeholders to ensure that security, law and order was maintained.

Apart from working meticulously with stakeholders to rid the city of filth as promised by the NDC in their manifesto, the new KMA boss pledged to do what was right to ensure that investors chose Kumasi as the best destination for investment in the country.

Recognizing that transparency was the best antidote to eradicating corruption, Mr. Sarpong who wore a white apparel to signify his victory, vowed to run a transparent and open administration to ensure that Kumasi moved forward in the right direction.

He pledged to work hand-in-hand with all and sundry in the metropolis irrespective of one's political affiliation to make sure that everybody contributed his or her quota towards the development of the Ashanti regional capital.

Mr. Sarpong secured a one-touch victory with 77 votes out of the 79 votes cast, representing 97.5 percent.

Eighty-six assembly members including 23 government appointees were expected to cast their votes but 80 of them turned up. Out of the 80, 78 voted for Mr. Sarpong while two voted against him.

The election was supervised by officials of the Ashanti regional directorate of the Electoral Commission (EC) led by the regional boss, Kofi Asomaning.

As usual, scores of party leaders, supporters, friends and well-wishers who wore assorted party paraphernalia besieged the assembly premises to show solidarity with the man who is stepping into the shoes of Madam Patricia Appiagyei.

Interestingly, Dr Anthony Akoto Osei, the Member of Parliament (MP) for Tafo Pankrono and former Minister of State at the Finance and Economic Planning Ministry and his constituency chairman, Moses Donkor were also present.

As if the victory of Mr. Sarpong was a bargained one, all the assembly members who showed up for the election were clad in all-white apparel.

Earlier, the assembly elected Mr. Kofi Senya, assembly member for the Suame Electoral Area, as the new presiding member of the assembly.

Contesting the position unopposed, he secured 80 out of the 80 votes cast, representing 100 percent.

DAILY GUIDE gathered that two persons, Sule Gariba, a government appointee and Nana Kofi Prempeh, chief of Adubinso in the Kwabre district of Ashanti, were to contest Mr. Senya but both withdrew from the race at the last minute.

Mr. Senya who is succeeding Nana Barfour Kese II, chief of Adum, is coming back to the position which he first held about four years ago.

Accepting the position granted him, Mr. Senya promised to bring to bear his experience at the assembly to ensure that Kumasi moved forward in the right direction.