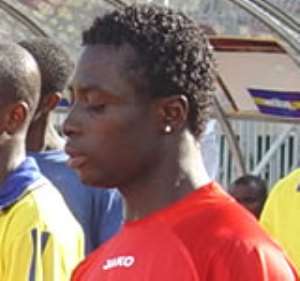 The mercurial midfield will only return to the Accra side when his outstanding 50 million cedis is paid by the 2001 African Champions.

Taylor downed tools on Tuesday as efforts to get the management of the club to settle the amount has fallen on deaf ears.

"They owed us and promised to pay as far back as last December but when you call then they give you stories," Taylor's agent Bismark 'Chief' Ohene said.

"I have spoken to management members in Hearts and I do not get a feeling that they will settle the matter soon.

"I have as such withdrawn the player as it is a breach of contract so he will not play for Hearts from today."

Ohene however said the midfielder who excelled at the recent African Nations Championship will return to the club if the amount is settled.

"We all know how Hearts of Oak are with money issues and firm protest is the only language they understand," Ohene said.

"Taylor will return if the money is paid. If not I will report the issue to the GFA to completely withdraw his registration."

If the Ghana Football Association approves Taylor's exit it will be a huge blow for Hearts as they could have earned some cash from his potential move to Europe.

He has been recently linked with moves to England and Israel.