Hearts of Oak pull out of Otumfuo Cup 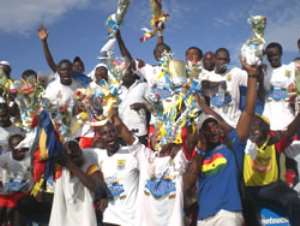 
Hearts of Oak have withdrawn from the maiden Otumfuo Challenge Cup which begins on Saturday due to excessive injury list.

"We have already drawn our programme which made an allowance for our players to rest after a long hectic period which began way back during the offseason," the club's administrative manager Ashford Tettey-Oku told Graphic.

The halfway League champions say the inconsistencies in the League calender has also necessitated their withdrawal.

The club's Communications Director, Albert Commey told Ghanasoccernet: "We cannot take part because the date has been changed and it cannot help looking at the situation that we have now.

"Mind you the second round will be tough and we need to be strong on all front to annex the league trophy,'' he added.

Sekondi Eleven Wise have stepped in to replaced the Phobians.

Kotoko, Kessben FC and Bechem Chelsea have agreed to play in the tournament to commemorate the 10th anniversary of the Ashanti King.