I don't fear being sacked-Opeele 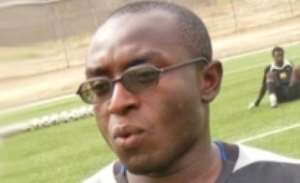 Kumasi Asante Kotoko coach Isaac Opeele Boateng says he doesn't fear for his future at the club in the recent spell of mixed.

Opeele moved to Kotoko as an assistant in January but took interim charge with the departure of Belgian coach Maurice Cooreman.

He has recorded mixed results including two painful defeats at the Baba Yara Stadium to Eleven Wise and Gamba All Blacks.

Opeele was also assistant coach when Hearts silenced them 2-1 in Kumasi.

"Being sacked is the last thing I think about as a coach and i am not worried at all. My worry is with how to get the boys winning," Opeele told Ghanasoccernet.com

"My situation is like I have been caught in a cross-fire. Things are not going on well and I have to keep my head above waters.

"The most important thing is that we forget everything and qualify on Sunday against Ittihad Khemisset.''

Kotoko have a two-goal cushion after a 3-1 win from the first leg.