Egypt and Nigeria in shock draws 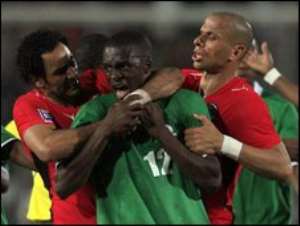 Egypt and Nigeria have been held to shock draws at the start of their campaigns for a place at the World Cup in 2010.

Egypt, who are reigning African champions, were held 1-1 at home by Zambia.

Nigeria played out a goalless draw with Mozambique in Maputo.

In Sunday's other matches Ghana and Ivory Coast both secured expected victories.

Egypt have not been to the World Cup since 1990 but after winning back-to-back African titles the team are expected to make it to South Africa this time round.

But their campaign in Group C got off to a stuttering start when they dropped two points against visitors Zambia .

Wigan striker Amr Zaki put the Pharaohs in front on 26 minutes but they failed to extend their lead.

Zambia equalised after 10 minutes of the second half through Dennis Banda.

Egypt coach Hassan Shehata brought on BBC African Footballer of the Year Mohamed Aboutrika and striker Mido to try and secure a winner but the game ended one-apiece.

All four teams in the group have one point after both matches ended in a draw.

In Group B Nigeria also failed to shine, grinding out a 0-0 draw with Mozambique - who should have won the game.

The hosts had two goals disallowed in Maputo, whilst the closest Nigeria came was an Obafemi Martins strike into the side-netting in the dying moments.

Injured Nigerian vice-captain Joseph Yobo, who watched from the touchline having paid his own way to Maputo, was philosophical after the match.

"A draw is a fair result," he admitted to the BBC's African sports programme Fast Track.

"We're still not out and there's still a lot to play for. It's not a bad result, a point is good enough. Hopefully in the next few games we can start winning."

Mozambique were unlucky not to take all three points, after having two goals disallowed.

Striker Dario Monteiro had two good headed chances disallowed which, had either stood, would have given the home side a famous victory.

The Carthage Eagles top the group after securing a valuable 2-1 away win in Kenya on Saturday.

Ghana got off to the best start possible with a goal in the first minute of their match against Benin .

Prince Tagoe got the goal - but Ghana went through the whole of the rest of the game without scoring and held on for a one-nil win.

Ivory Coast made sure of their place at the top of Group E with a 5-0 win over Malawi in Abidjan.

Didier Drogba scored twice, including a penalty. Bakary Kone, Salomon Kalou and Romaric were the other scorers.

Burkina Faso second in the group after their win over Guinea on Saturday.