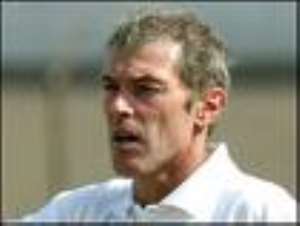 BENIN COACH SHOULD BE UNHAPPY Benin have delayed their arrival in Ghana for Sunday's 2010 joint Nations Cup/World Cup qualifier due to their inability to settle a row over bonuses and it is unclear if they can make the trip for the match.


The Squirrels were expected im Kumasi on Friday but officials of the Ghana Football Association who were at the airport to welcome were left confused.

The Benin Sports Ministry are unwilling to meet the demands of the players and that has shrouded their opening qualifier in doubt.

"I don't know what to do now because the both players and government are talking differently. The players want something but will not be given," Benin FA President Anjorin Musharaf told Ghanasoccernet.

"We have one day before the match and we are not here.This should tell you about our preparation for this match.

"But however Insha Allah I know this issue will be solved and we can come in tomorrow(Saturday) for the match."

Benin advanced to the third qualifying round ahead of 2006 World Cup finalists Angola in the previous stage.

Ho West Tension: Killer Reports Himself To Police
55 minutes ago