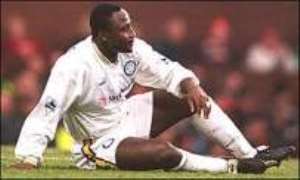 YEBOAH WAS A FINE STRIKER Ex-Ghana international Tony Yeboah has conceeded publicly that the bad blood between himself and Abedi Pele during their days with Black Stars robbed the national team off successes.

The dupty captain as at the time admitted that though they had one of the best squads on the continent, laurels eluded them because of the cold war between them.

The closet Ghana came during their partnership in the national team was a runners-up spot at the 1992 Nations Cup in Senegal.

Speaking to the state-owned newspaper, Graphic Sports, the former Frankfurt striker said:"During our days we had one of the best squads that could have won any trophy on the continent but lack of unity conspired against us.''

He however dismissed perceived anatagonism existing between them.

"We were not enemies neither were we close friends,though we spoke often to each other when we met there seem to be a cold war but we have mow realized our mistakes," he added.

Recounting the events leading to the loss of the Black Stars to Germany in 1993, Yeboah said when the news came that the substantative captain(Abedi) was not playing he took the responsibility to lead the team in that game.

But some officials later begged him to give back the captain band to Abedi because he was around.

Many believed that contributed to the team's 6-1 defeat but the burly striker refuted that claim.